Europe would be facing terrorists if Hezbollah did not exist

TEHRAN (Basirat) : Europe would be facing many problems with the terrorists if Hezbollah did not exist, Tehran said on Monday in reaction to Britain’s listing of the Lebanese resistance movement as a terrorist organization. 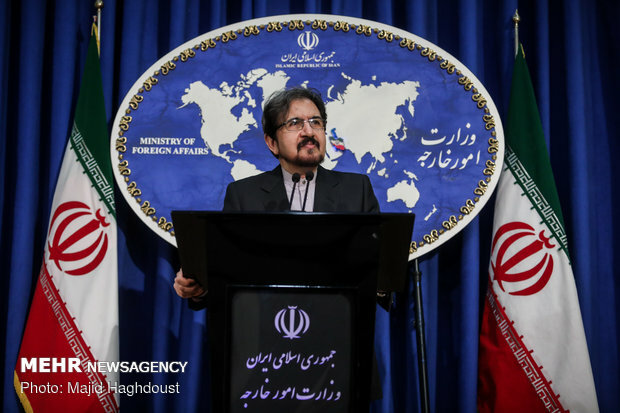 In a press conference, Foreign Ministry spokesman Bahram Qassemi said, "In an optimistic situation, Britain has made a strategic mistake, and in a pessimistic one, this policy reflects their relations with certain regional countries.”
Hezbollah is an important part of the Lebanese administration and parliament, played an important role against the terrorists in recent years and prevented the spread of terrorists to other regions including Europe, Qassemi stated.
Hence, he continued, Hezbollah should be supported and hailed by other countries. "The British government must be held accountable for the bitter incidents that might happen in the future.”
Hezbollah proved a strong force against terrorist groups such as Daesh (ISIS), al-Nusra and other militant groups in Syria.
Qassemi: UAE’s claims shows hateful conduct toward Iran
The spokesman also reacted to the recent allegations made by the Emirati foreign minister against Iran, saying his remarks showed the UAE’s hateful behavior toward Iran.
Addressing the opening ceremony of the 46th session of the Council of OIC Foreign Ministers in Abu Dhabi on Friday, Emirati Minister of Foreign Affairs Sheikh Abdullah bin Zayed Al Nahyan claimed that Iran interferes in other countries’ domestic affairs and supports, finances and arms terrorist groups.
"Unfortunately, some countries have gotten used to repeating such claims in order to cover up the harm their policies have imposed on the Muslim world,” Qassemi remarked.
Taking advantage of the OIC meetings and raising divisive and false issues against other members are contrary to the organization’s objectives and philosophy, he added.
‘Tehran, Europe disagree on regional policies’
On Iran’s regional influence and some European countries’ objection to it, Qassemi said, "We have a difference of opinion with some European countries on some of Iran’s regional policies, and whenever possible, we’ve tried to explain to them that Iran’s regional influence, which is raised and vilified by America and the Zionists, is an inherent, historical and popular influence and it does not have anything to do with some measures that we take.”
He further said that Iran’s influence "has always existed and is not something that can be reduced or extended by the request of one or two countries.”
The European countries know that Iran will never accept any conditions about its domestic and foreign policies and does not need permission from others, he emphasized.
"We have paid a great price for our country’s independence and will act as an independent country,” Qassemi added.