TEHRAN (Basirat): Over 70 mass graves, containing the dead bodies of tens of Izadi people who were massacred by the ISIL terrorist group in the city of Sinjar in Northern Iraq, have been discovered, a senior official said. 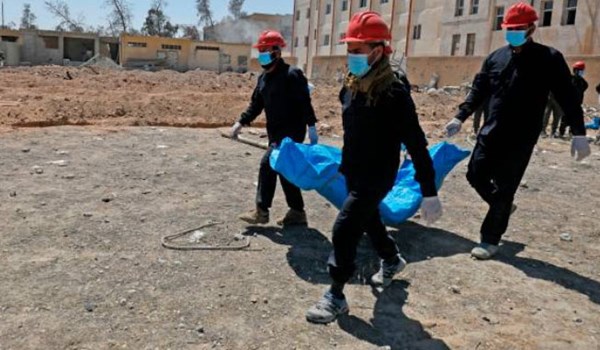 "A sum of 76 mass graves containing corpses of Izadi people who were victimized by the ISIL terrorist group have been found in Sinjar," Iraqi Commissioner for Human Rights Faten al-Halafi said.

He noted that in the latest discovery nine mass graves containing the dead bodies of Izadi people have been discovered in Northern Iraq.

In a relevant development last Wednesday, the Syrian Army discovered over 30 dead bodies from the debris of the buildings destroyed in the US-led air raids on Raqqa city and mass graves of ISIL's victims.

"The dead bodies of at least 10 Syrian victims who had been killed in the US airstrikes last year were discovered from buildings in al-Adkhar, al-Bayatareh and al-Haramiyeh districts of Raqqa City," media activists said.

They also said that the corpses of 23 victims massacred by the ISIL were retrieved from Fakhikheh mass grave South of Tale al-Ba'as Garrison in Raqqa City.

In a relevant development last month, the corpses of over 30 people who have been killed by the ISIL terrorists or in airstrikes by the US-led coalition were found from mass-graves and rubble of buildings in Raqqa.

Media activists in Raqqa reported that the civil workers have discovered the bodies of 28 people, including women and children, from a mass-grave near the village of Fakhikheh.

They added that corpses of 4 other civilians, including one child, killed in the US airstrikes, have been found from under the debris of a building in al-Haramiyeh and al-Badou districts in Raqqa.

After one year of occupation of Raqqa by the US and the Syrian Democratic Forces (SDF), the corpses of ISIL and US victims are everyday pulled out of the mass-graves and ruins.

In a relevant development late last month, tens of dead bodies of the victims of the US-led airstrikes and the ISIL's crimes were discovered from the debris of ruined buildings and mass graves in Raqqa, media sources said.

Media activists said the corpses of four civilians were retrieved from the debris of buildings ruined in US airstrikes last year in al-Sokna district of Raqqa city.

Moreover, four dead bodies of civilians were recovered from the buildings destroyed in US air assaults in al-Bayatareh in Raqqa city, the activists added.

They also said that the corpses of about 50 people, including women and children, were discovered from a mass grave in al-Fakhikheh South of Raqqa city.

This is while the ISIL had taken control over several villages and al-Tabaqa military airport in Southwestern Raqqa in 2014.