TEHRAN (Basirat): Iranian students on Wednesday gathered in front of the British embassy in Tehran to give a jolly roger to the country's ambassador to remind London of how Iranians view the seizure of an Iranian oil tanker in the Strait of Gibraltar by Britain. 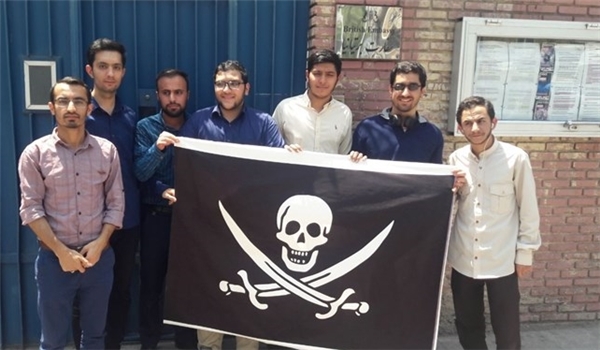 A number of te members of the union of Iranian universities' independent Muslim students associations in a symbolic move gifted British Envoy to Tehran Robert Macaire a jolly roger in protest at London's hostile measure and "piracy".
Earlier this month, British Royal Marines in Gibraltar stormed an Iran-operated supertanker off the coast of Gibraltar, seizing the 300,000-tonne Grace 1 based on the accusation that it was carrying oil to Syria in possible violation of the European Union’s sanctions on the war-torn Arab country.
According to Gibraltar authorities, the 28 crewmembers, who are nationals of India, Pakistan and Ukraine, are currently staying aboard the tanker, along with local police and customs officers boarding the vessel for a period of a probe.
Iran has condemned the move as “maritime piracy” and summoned Britain’s ambassador in protest. It has vowed to employ all its political and legal capacities to secure the release of the vessel and uphold its rights.
The seizure of the Panama-registered Grace 1 came as the US pledged to cut Iran’s oil exports to “zero” as part of the sanctions that it has reinstated after leaving a landmark multilateral 2015 nuclear deal with Iran in May last year, and many analysts take London’s move as an indicator that the UK is not committed to the nuclear agreement and is much on the side of Washington in Trump anti-Iran maximum pressure campaign.
Supreme Leader of the Islamic Revolution Ayatollah Seyed Ali Khamenei warned London on Tuesday of a pending response to the seizure of an Iranian oil tanker that he referred to as a case of "piracy".
The Supreme Leader slammed the British government for the recent attack on Iranian oil tanker, and stated, "Among all these nonsensical expectations, the vicious government of Britain commits piracy, and hijacks our ship. They commit crimes and make it appear legal. The Islamic Republic and devout agents of the system will not leave such vicious acts without a response and they will respond in a proper opportunity and place."