Belgian globetrotters share us their new perception of Iran

TEHRAN(Basirat): Last Monday, a Belgian couple, who are on an overland journey to China, paid a visit to The Tehran Times, where they let us share their views, experiences and feelings about Iran in a cozy chat with the daily.

Ciara Reid and Lennart Gheysens in particular noted that the hospitality of Iranian people was beyond their expectations, saying “One of the reasons that we love Iran so much is the hospitality and kindness of the people.”

“I think that is what a lot of other nationalities can take as an example and learn from it,” Ciara said.

When it came to driving in Iran, Lennart, however, didn’t give a good score, saying he had heard that Georgian people had earned a bad reputation for driving carelessly, but he thinks that the situation is even worse in Iran!

The couple also showed us various parts of their camper van, which was like a well-made miniature home equipped with almost everything including a bed, a dining table, chairs, a stove, sets of closets, cabinets, a toilet, a shower, a sink, electronic equipment and other amenities! There were powerful solar panels to charge the batteries that powered their moving home.

The transcript of the interview is given below:

Is this the first time you’re visiting Iran?

Lennart:  No, the second time. We visited in 2016 and that was only Iran that we visited [during that trip]. 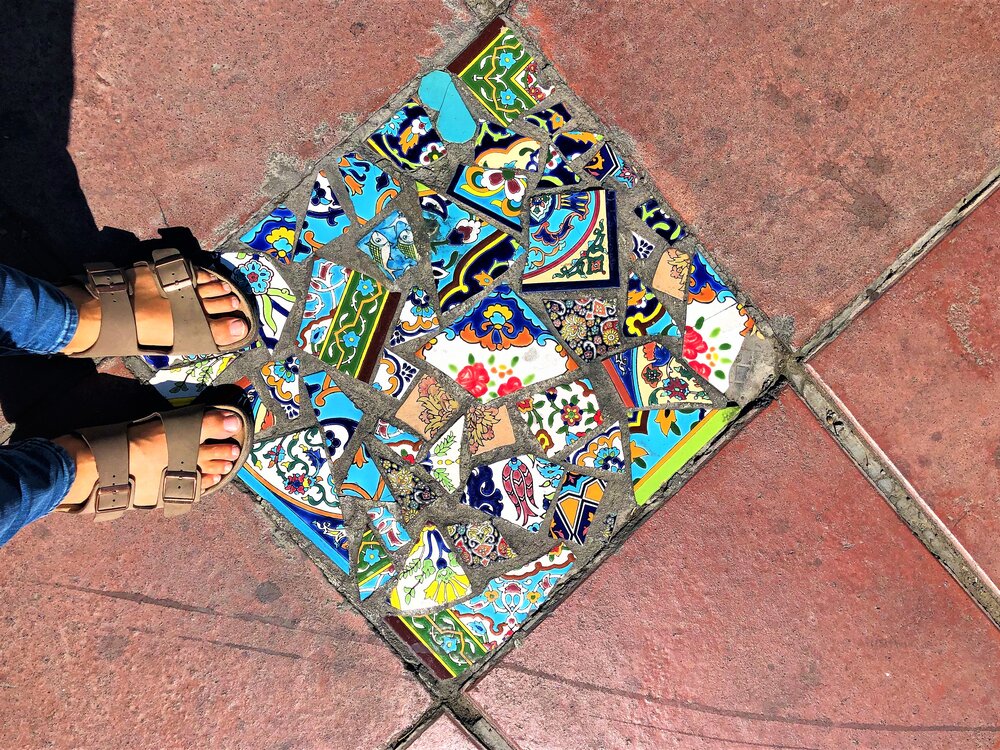 Ciara: We visited Iran in 2016 in a trip that was recommended by a friend of ours. And when we were here we really fell in love with the country. We never had that [experience] before. Everything is so beautiful and people are so friendly. And at that time we said we definitely want to go [come] back and then maybe all the different countries around Iran, maybe they’re beautiful too. And European people usually don’t get to see them so that’s why we decided to go on a trip along the Silk Road so it was really our trip in Iran in 2016 that sparked the idea of our current trip.

Please tell us more about the itinerary of your trip.

Lennart: We drove from Belgium quite fast through all the European countries like the Netherlands, Germany, Austria, Slovenia, Croatia, and Bosnia because we want to focus on the Caucasus region and then central Asia. We drove from Croatia to Albania, Montenegro, and then Greece to Turkey, where actually the real trip started for us. We started to take things slower. So we are driving from Belgium to China.

TT: Some foreign travelers say that driving in Iran resembles a video game. What do you say about that?

Lennart: Yes, it is. We had heard that Georgia is very bad [when it comes to reckless driving] but I think in Iran it’s even worse. But for us, our big car helps us to somehow avoid accidents. [Our rule is] to try to drive like a local… because in Europe, this is your lane and you cannot drive over it or whatever, but here….

If this happens in Europe, they will just leave you at the side saying it’s your own fault, no one will help you. So we told this story to people back home where a lot of people were saying us “Oh Iran is dangerous”! But for me it is one of the safest countries

TT: What about the quality of roads and highways in Iran?

Lennart: Actually, very good, I mean, for me, it’s comparable with European roads… actually the roads in Iran are quite good, they are almost flat and smooth.

TT: What’s your opinion about the Iranian hospitality?

Lennart: Well, it’s famous for a reason, because it’s true, one of the reasons that we love Iran so much is the hospitality and kindness of the people, like, the first time that we got here in 2016, we were in a taxi and the taxi driver invited us to his home and even though he couldn’t speak English, we were talking on Google Translate to each other. 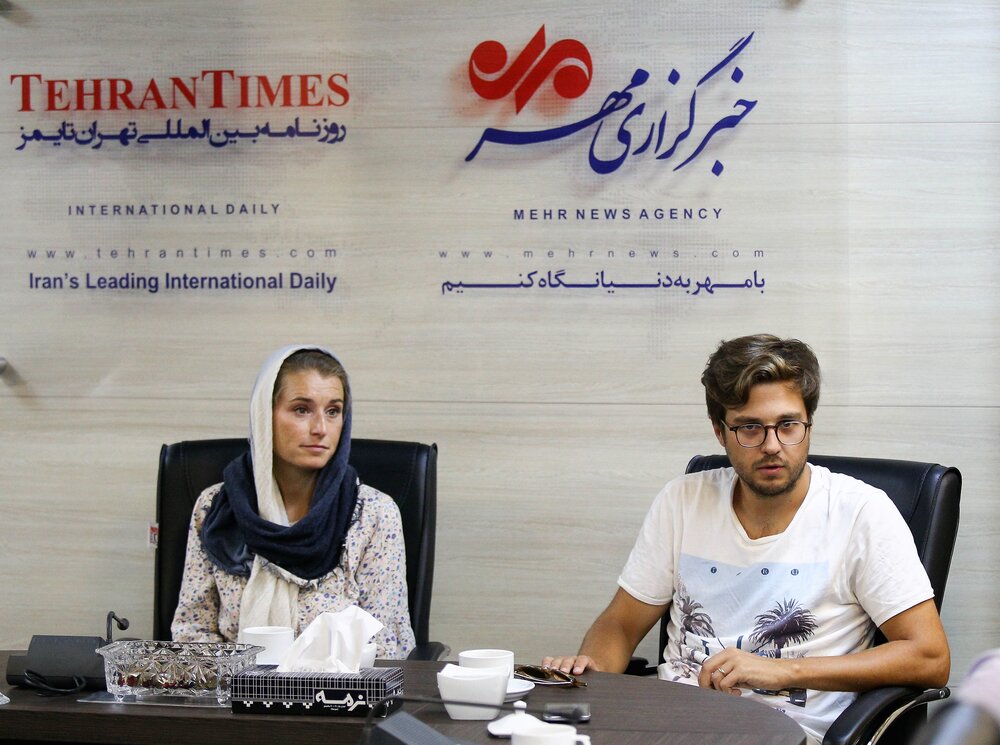 It was very nice to meet his wife and their toddler and a friend of whom we also met in Mashhad. We’re still friends now and we are staying with his family here in Tehran and I mean [while in Iran] everybody likes to help you.

You know, our car, runs on diesel -- not a lot of cars running on diesel in here, only the trucks and buses.

Ciara:  And we posted something on Instagram and said oh we’re scared, we don’t have any more diesel…. And then some Iranian people picked it up and posted their own [massages] on our Instagram page and suddenly we were like flooded with…; “Do you still need diesel?”, “You can get it there!”, …, “I can help you!”, and “We have diesel!”

Some ten people reached out to us that we didn’t know… just out of the kindness saying oh these are foreigners, they are in trouble, we can help!

Yes, this is a phenomenon that Iran is famous for.

Ciara:  I think that is what a lot of other nationalities can take as an example and learn from it. One time in 2016, we wanted to go to Yazd and in the bus station we went to different offices saying Yazd, Yazd, Yazd -- we were in Shiraz at that time -- and we [finally] took a wrong bus!

On the Google Map we found the bus was going all the way to the south so we asked the driver, saying Yazd? And the driver said, Bandar Abbas, Bandar Abbas! And we were like “Uh-oh!”

The driver pulled to the side, a bus full of people just stopped to the side. The driver said get out! We thought what we were going to do with our packs… we were thinking like “Oh my God! They want to leave us here on the side of the road!”

Then a man showed up. He said “Come with me, come with me!” And he drove us to a police station were there were a lot of taxies and he even paid us the taxi to get back to the bus station and we were very excited.

If this happens in Europe, they will just leave you at the side saying it’s your own fault, no one will help you. So we told this story to people back home where a lot of people were saying us “Oh Iran is dangerous”! But for me it is one of the safest countries.

Have you selected a motto or a theme for your whole journey?

Ciara: Not really a theme but we actually want to see more of the countries along the Silk Road, so the “Silk Road” maybe our theme. We prefer to focus more on nature than cities during our journey!

We are also very amazed of the diversity of nature in Iran.

Tell us more about your portable home!

Lennart: We chose a Mercedes [camper] because it’s easy to find parts for Mercedes everywhere and because it’s also very reliable so we bought it second hand in Holland…. We removed everything from its back and started to modify everything from electricity to water and heating because I am a handy guy we did all the carpentry, installing a solar panel, air vents, curtains …. Everything!

And now, a tough question! Before your first visit Iran in 2016, you had a perception of the country, whatever it was, and after you felt the country, encountering its people, you developed another perception. How do you compare them, the first which was mainly shaped by Western media, and the one you have developed in person?

Lennart: Yeah, in the beginning for us, Iran was not very well known, just a Middle Eastern country, some said don’t go there because it’s dangerous …. So in the beginning we had a perception that it was very dangerous and also some (European) people didn’t know the difference between Iraq and Iran and the Western media don’t help very much to give a clear picture. 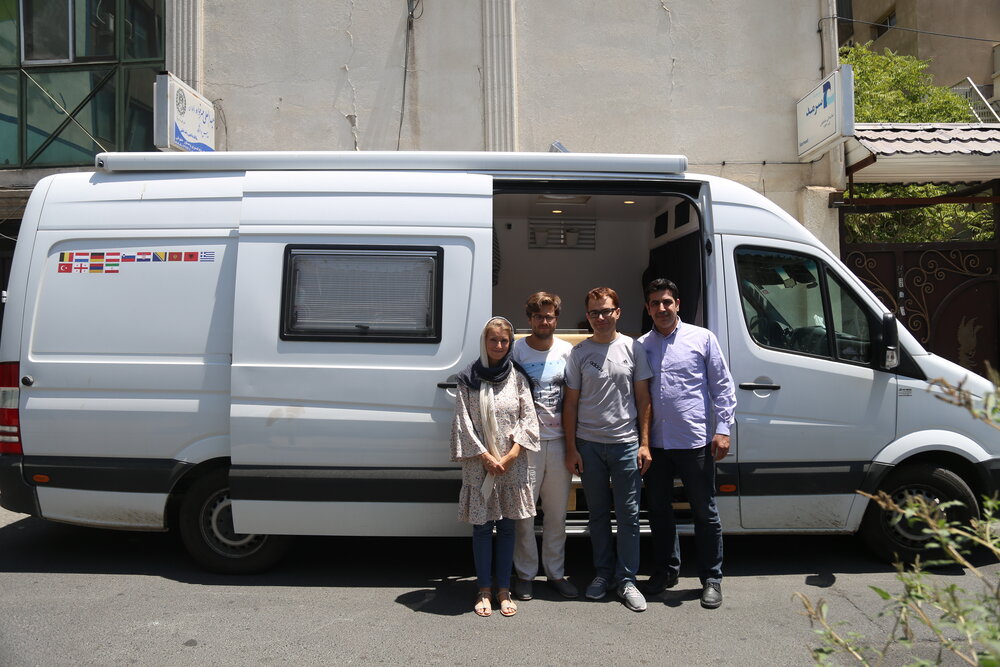 But then some friends of ours visited Iran and we read a lot about it ourselves and yeah we saw that its people are very friendly, it is so safe and we like it so much.

Ciara: I think a funny anecdote is that we told our family and friends that we wanted to travel to Iran, everybody said “Oh you’re crazy! It’s very dangerous, you wanna get killed!”

And we said “No! It’s safe, it’s safe,” and then when we arrived in Iran we heard the bombings and attacks in Paris and an Iranian taxi driver asked where we are from and we said we are from Europe. “Europe? It’s so dangerous!” the driver said. So when we were back home in Belgium and people said “Oh, how was your trip to Iran?” we said, “Well it was actually much safer than it was in Europe!”