TEHRAN (Basirat) : Iranian President Hassan Rouhani said the US is mistaken to think that its policy of pressure and sanction could help it achieve the objective of regime change in Iran. 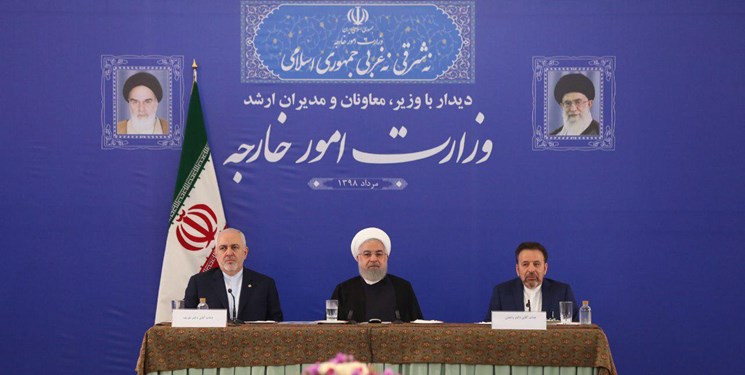 In a meeting with Foreign Ministry officials in Tehran on Tuesday, President Rouhani voiced full support for Iranian Foreign Minister Mohammad Javad Zarif who has been recently hit by the US sanctions.
The president underscored that the Foreign Ministry and its director do not belong to a specific party or faction, but represent the entire Iranian nation and reflect Iran’s foreign policy in the international arena.
Rouhani then made it clear for the US government that it will be impossible to change the regime in Iran through sanctions or pressures, stressing that the Iranian people will never back off from safeguarding their country and the Islamic Republic as long as the Article 6 of the Constitution in in effect.
The Article 6 stipulates that the affairs of the Islamic Republic of Iran must be administered on the basis of public opinion expressed by the means of elections.
The president also lauded Foreign Minister Zarif as a political elite who has gained the highest degree of specialist expertise in foreign policy with his talent and experience, like a Mujtahid in the religious studies.
On July 31, the US Department of State said Washington has designated Zarif for acting on behalf of Leader of the Islamic Revolution Ayatollah Seyed Ali Khamenei. The US president had issued an executive order on June 24, imposing sanctions on the Leader and his office and authorizing sanctions on others associated with Ayatollah Khamenei.
The senior Iranian diplomat has dismissed the US move, saying that being designated by the US would not affect him since he has ho properties outside Iran.
The Iranian foreign minister has received widespread public support and backing from the authorities after being blacklisted by the US.