Today's young elites can make up for Pahlavi era's backwardnesses

TEHRAN(Basirat): A hundred and fifteen medal winners of national and international scientific olympiads as well as members of the National Youth Volleyball team met with the Leader of the Islamic Revolution—Ayatollah Khamenei—this morning, Wednesday, August 7, 2019. 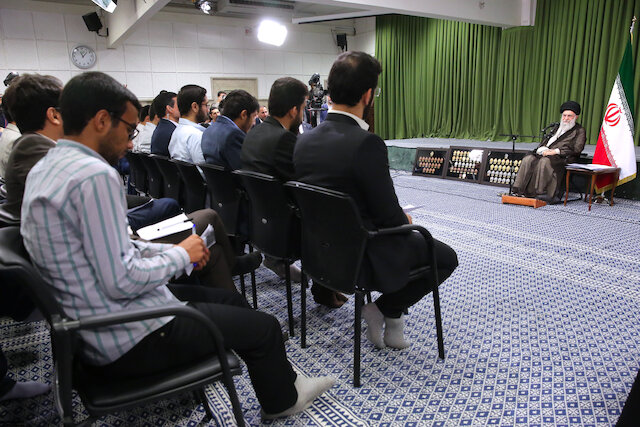 In this meeting, Ayatollah Khamenei encouraged his young audience to preserve with implementing their talents and asserted: The gifted individuals have an endless path before them, and mankind’s capabilities are endless and extraordinary. Do not let your capacity and talents stop at this level. When you win medals, you should continue to move forward.

The Supreme Leader praised the efforts of the National Youth Volleyball team and their Iranian coach and held: I have always believed that our head coach should be Iranian. I am glad that an Iranian head coach has managed to assist the youth to achieve the championship.
Referring to Iran’s -21 National Youth Volleyball Team winning the World Championship held in Bahrain, Ayatollah Khamenei stated: Thanks be to God, our young athletes brought us pride and honour. Where [did they compete]? In a country whose people are of course friendly with us, but the government is unfriendly with us. There, you stood above all in volleyball. This is invaluable. The Iranian people became happy; and I, because of the people’s happiness, became very happy too.
His Eminence went on to say: As for the Iranian head coach, I have always believed this is apt for our country and Iranian clubs and groups. I won’t interfere, but the head coach doesn't have to be a foreigner. I thanked them when they appointed an Iranian head coach. I am glad that an Iranian head coach has managed to assist the youth to make such an achievement.
Ayatollah Khamenei made reference to the backwardness imposed on the Iranian nation during Qajar and Pahlavi eras, and urged young intellectuals and gifted individuals to move beyond borders in achieving and developing advancements; His Eminence maintained: We have a lot to do; once we had a leading position in the world. Then, it began to decline. Yet, during the past couple of centuries, with the foreigners’ intrusion into the country, the decline is no longer normal. Instead, it is imposed. We were held back and the world advanced. Despite all our efforts after the Islamic Revolution, especially during the past twenty years, in the arenas of technological and scientific dynamism, we are still suffering from much backwardness; and the most important duty of the young gifted generation, in addition to fast continuation of scientific success, is to break through the frontiers of science and technology.
Referring to Iran’s leading position in Nanotechnology, His Eminence emphasized: it is expected that the elites and future generations discover hundreds of new areas like Nano and unknown phenomena in science, biology and technology, and do not be satisfied with only continuing the scientific progress.
Ayatollah Khamenei reminded his audience: do not forget to establish a heart-felt relationship with God, and to rely on God and ask for His assistance.
The Leader of the Revolution mentioned the presence of a female medal winner who has a toddler and stated: the presence of this honourable woman along with her husband and child shows that women can also achieve high levels of success while having kids and husband.
In another part of his speech, Ayatollah Khamenei referred to the remarks of a young academic elite about the problems in the way of the talented scholars and the weak performance of the responsible organizations and stated: the problems should not make the youth disappointed and stop them because hopelessness is a poison. If the past generations had become hopeless and inactive, we would have still been living in the tyrannical and corrupt Pahlavi era. But thanks to the youth of the past generation, a situation is provided in the country today in which the young intellectuals can stand out and clearly express themselves.