Any war against Iran will set the entire region on fire: Hezbollah chief 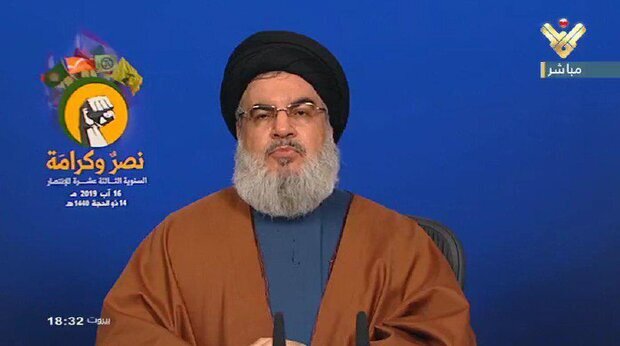 The Hezbollah chief also said, “Iran shot down a U.S. drone and seized a British oil tanker. These show Iran’s courage.”
He added that U.S. President Donald Trump is well aware of Iran’s military power and that is the reason he avoided attack on Iran after the downing of the drone.
The Islamic Revolution Guards Corps (IRGC) shot down a highly-sophisticated U.S. stealth drone in June after it violated Iran’s airspace over the Persian Gulf.
Trump reportedly gave initial approval for the U.S. military to launch strikes on Iran in retaliation, however, he cancelled the strikes.
IRGC Quds Force Commander Major General Qassem Soleimani has warned that the U.S. may begin a war against Iran, but it is Iran which will “end” it.
Iranian Foreign Minister Mohammad Javad Zarif has also said that anyone who starts a war against Iran will not be the one who ends it.
During a joint press conference with German Foreign Minister Heiko Maas in Tehran in June, Zarif insisted on Tehran’s long-held position that Iran has not initiated and will not initiate a war with any country.
However, he said, no one can take a military action against the Iranian people without receiving a “firm response”.