National library to honor 40 artists with artworks on Ashura

TEHRAN (Basirat) :  The National Library and Archives of Iran plans to honor 40 Iranian artists who have created outstanding works about the tragedy of Ashura over the past century. 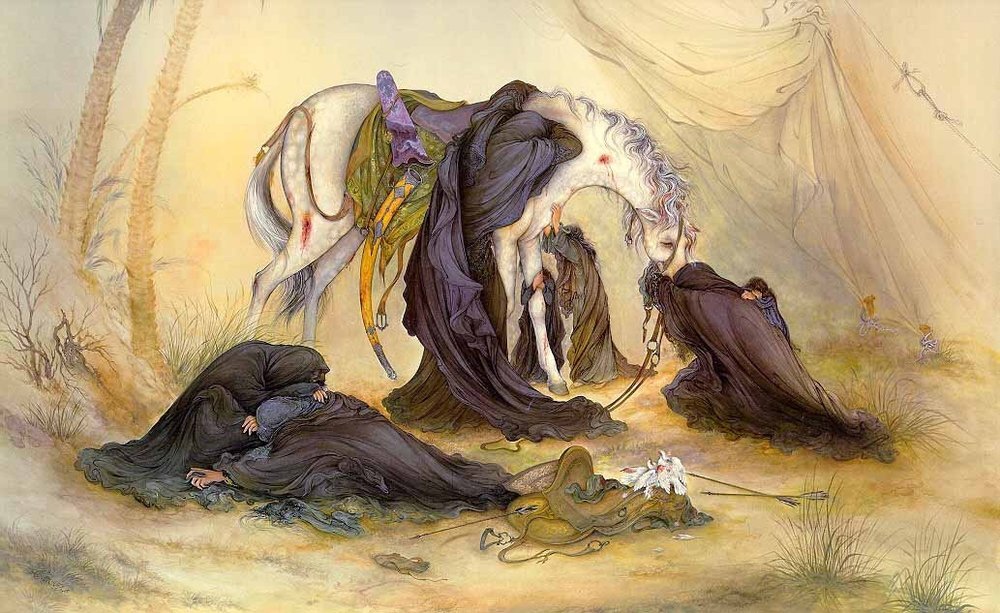 Photo: “Evening of Ashura” by Mahmud Farshchian.
The honoring program entitled “Forty Days of Love” will be held on October 21, the NLAI announced on Tuesday.
Master of Persian miniature Mahmud Farshchian and director and writer Bahram Beizai are among the artists who will be honored in the program.
Farshchian has created several paintings including “The Evening of Ashura”, “Ali-Asghar (AS)” and “The Standard-Bearer of Truth” about the tragedy of Ashura.
Ashura is the 10th day of Muharram, the day upon which Imam Hussein (AS) and his companions were martyred in Karbala as a result of their valiant stand against the injustices of the oppressive Umayyad dynasty in 680 CE.
Beizai is the writer of the play “The Fateful Day”, a screen adaptation of which was made by director Shahram Asadi in 1995.
The film is the story of a Christian man who converts to Islam for the love of a Muslim girl. At the wedding, he hears voices calling for help. He leaves the ceremony and takes a journey to Karbala. But he arrives at the end of the Battle of Karbala after the martyrdom of Imam Hussein (AS) and his companions.