US should have ended Syria presence long time ago

Tehran (Basirat) :Iran has once again denounced Washington’s “illegitimate” military presence in Syria, saying the decision for the United States to pull its forces out should have been made a long time ago. 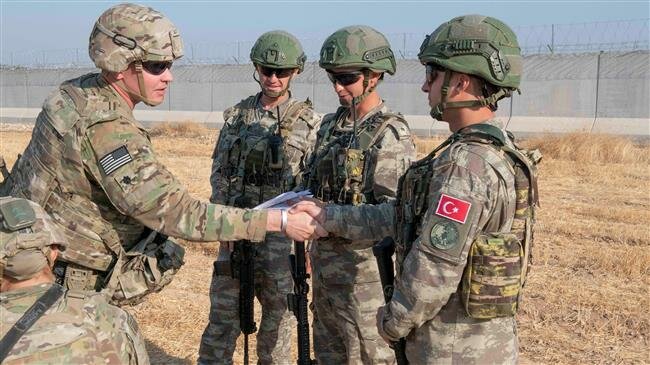 In a statement released on Tuesday, the Iranian Foreign Ministry expressed hope that Washington’s plan to withdraw its forces from the northern parts of Syria would contribute to the restoration of peace and stability to the Arab country.
Tehran believes the US should have made the decision to “end the occupation of Syrian territories and withdraw its military forces from the country much sooner.”
In a major U-turn in the US military policy, the White House announced in a statement on Sunday that the US would be withdrawing its forces from northern Syria, clearing the path for an expected Turkish operation against the Kurdish militants, who had long enjoyed Washington’s support.
“The United States Armed Forces will not support or be involved in the operation,” said the statement, adding that the American troops “will no longer be in the immediate area,” without clarifying whether they will completely leave Syria or will be redeployed within the country.
US President Donald Trump later said in a tweet that it was too costly to keep supporting the Kurdish militants in the region, which Ankara views as terrorists linked to local autonomy-seeking militants of the Kurdistan Workers’ Party (PKK).
Elaborating on the White House’s announcement, a senior Trump administration official said Monday that 50 American troops in the region targeted by Turkey would be redeployed elsewhere in Syria, according to Reuters.
The unnamed official said the decision to redeploy the troops does not constitute a US withdrawal from Syria.
Turkey has, since 2016, launched two military operations inside Syria against the Kurds and seems to be set for a third one after the US-backed Kurdish militants failed to leave the areas near the Turkish border east of the Euphrates River.
Elsewhere in its statement, Iran’s Foreign Ministry said Tehran was “closely monitoring the worrisome news of a possible entry of Turkish forces into Syria.”
Turkey has given Iran an assurance that the operation it has started in northern Syria is temporary.
The Islamic Republic, it added “is opposed to any possible military operation” because it believes such a move “would not only fail to soothe Turkey’s security concerns, but would also result in massive material and human losses.”
The Foreign Ministry also voiced Iran’s readiness to help arrange an immediate contact between Turkish and Syrian officials so they can ease the existing concerns peacefully.
It further stressed that any talks between the two sides need to be based on respecting Syria’s territorial integrity and national sovereignty as well as the 1998 Adana Interstate Agreement on Combating Terrorism.
Meanwhile, Russia has said that it was not informed in advance about the US’s Syria withdrawal plan and that it was closely watching the situation there.
“No one has informed us. You and us don’t know yet what troops are being withdrawn from there, to what extent and are they withdrawn at all. You know, there have been different statements about troops pullout from different parts of the world that have not been confirmed,” Kremlin spokesman Dmitry Peskov said on Tuesday.
“This is why we are following developments of the situation very attentively,” he added.
Speaking on Press TV’s The Debate program on Monday, Daniel McAdams, executive director of the Texas-based Ron Paul Institute for Peace and Prosperity, described the US withdrawal from northeastern Syria as “a real shift” in Washington’s foreign policy.
“I think the rest of the world in the Middle East will be much happier when the US is finally gone,” he said.
The United States has started withdrawing its troops in northern Syria giving a green light for a Turkish operation against the Kurdish militia that it has been supporting in the past several years.
“It is good news that President [Donald] Trump has finally — let’s hope — turned his back on [former] president [Barack] Obama’s failed foreign policy in Syria. The US went into Syria with absolutely no strategic objectives other than this mantra that [Syrian President Bashar] al-Assad must go,” McAdams said.
“So let’s hope now that finally President Trump has realized what a disaster it is and understood that it is none of the business of the United States’ military to permanently stand between Turkey, its NATO ally, and the Kurds, its proxy force in Syria — its proxy not necessarily against ISIS (Daesh) ..., but its proxy against Assad and the Syrian government,” he added.

McAdams also criticized Turkey for turning a blind eye to the flow of militants into Syria, saying Turkish President Recep Tayyip Erdogan had “created the problem that he is now facing, [including] thousands of refugees, an unstable border, a group that Turkey considers terrorists well-armed by the United States.”
“I’m not here cheering Turkey’s invasion of Syria; however, I’m cheering the withdrawal of the US — if indeed it is a withdrawal. What we’re going to see in the US is a lot of crocodile tears being cried over the Kurd forces. Let’s not forget the Kurds betrayed their own country,” he pointed out.
Another guest to The Debate program, Yusuf Erim, a political analyst from Istanbul, said Turkey had been left with no scenario in northern Syria other than an invasion as its joint patrols with the US in the region were not successful amid a threat posed by Kurdish militants.
“Washington can’t stop Ankara from staging an operation in Syria because first its proxy army, the SDF (the Syrian Democratic Forces), doesn’t have the mandate to engage the Turks and secondly the United States is a NATO ally of Turkey,” he said.
Erim also said Washington’s Syria policy has been unstable over the years in contrast to Turkey, which has always maintained the same stance with regard to YPG presence on its borders.
“We’ve seen US policies be very wishy-washy in Syria, withdrawing one day, doubling down the next day, withdrawing again, but the Turks have been saying the same thing for five years, the presence of the YPG on Turkey’s borders is unacceptable,” he said.