TEHRAN(Basirat):The Islamic Revolution Guards Corps said in a statement that its intelligence organization has arrested Ruhollah Zam, an anti-Iran media figure, in a complex intelligence operation outside the country. 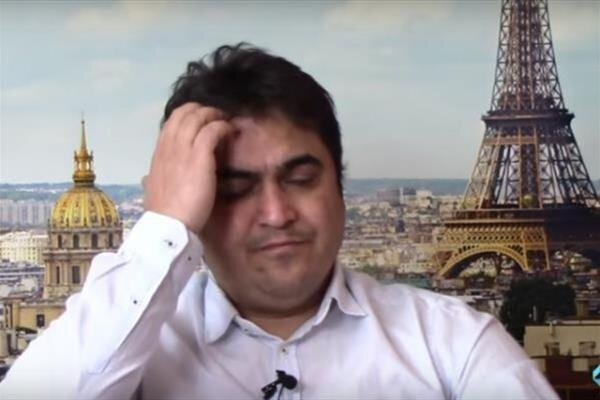 Ruhollah Zam who in recent years had become a tool in the hands of espionage services and anti-Iran bodies and had been publishing false news against the country in a Telegram channel known as ‘Amad News’, was arrested by the Intelligence Organization of the Islamic Revolution Guards Corps outside the country and was taken back to Iran, according to an IRGC statement on Monday.
The statement thanked God for “arresting one of the main figures behind the psychological war against the Islamic Republic in a complex operation.”
The statement noted that surprising and arresting this ‘evil and mercenary agent’ shows IRGC’s ‘upper hand’ against intelligence agencies of enemies.
The statement noted that IRGC’s Intelligence Organization has arrested Zam in “a professional, smart and multifaceted operation using modern intelligence methods and innovative techniques to handle and trick foreign [intelligence] services.”
It went on to say that the arrest came as Zam was “under the guidance of France intelligence service and supported by US and Zionist regime’s agencies, being covertly and overtly protected around the clock.”
“This great operation demonstrates the defeat of enemies’ intelligence services,” said the statement, noting that more information about the operation will be soon announced.
Also, the news of Zam’s arrest was immediately published in 'Amad News' channel, signaling that it is now under the control of IRGC.
Source:MNA
Iran’s Judiciary: Invaluable Information Obtained after Arrest of Zam
With their hostile behaviour, Americans made IRGC more dignified: Imam Khamenei
Iran's Quds Force, Hashd Al Shabi to provide security of Arbaeen pilgrims in Iraq
IRGC Deputy Commander: US Should Leave Region
Tags: basirat ، Ruhollah Zam ، Amad News ، IRGC
Error Report
0