TEHRAN(Basirat): Around ten percent of Iran’s total land area is covered by forests, which according to the latest figures amounts to 14 million hectares, mostly in the north, on or near the coast of the Caspian Sea, which has a heavy rainfall. 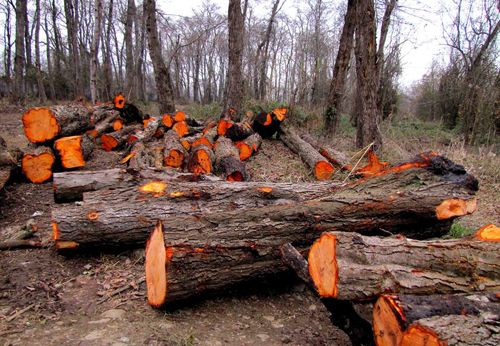 To a lesser extent forests exists on the foothills of the Zagros mountain range in the west, in addition to the mangroves on the Persian Gulf coastline.
Though small compared to the average global figures, these wooded areas, in view of the arid geographical zone where Iran is located, could indeed be considered a blessing of God Almighty.
As a matter of fact, this Divine blessing was once widespread in Iran, which in the 1940s, when the first nationwide statistics in this vital field was compiled, had 20 million hectares of forestland, after the systematic felling of trees had started in the late Qajarid era for laying of roads and setting up of factories.
This trend, or more properly ingratitude towards God blessing, continued rapidly during the Pahlavi era, and though partly stemmed after the victory of the Islamic Revolution, continues unabated and unchecked, especially in the Golestan, Mazandaran and Gilan Provinces, as the wood industry grows and well-connected manipulators exploit the loopholes in the laws on preservation of ecology and the natural environment.
According to reports released by the Forests and Watershed Management Organization, approximately 12,000 hectares of wooded lands across the country are cleared annually for agriculture, for livestock grazing, for mining, and for other purposes such as residential areas – often with official permission.
Although, the concerned officials might say that annually an equal area in Iran undergoes reforestation – last year it was 11,800 hectares – the reforested land may not have the same biodiversity and vegetation as well as wildlife, as the original forest.
There are no figures available, however, on the survival or growth rate of the reforested area, which requires time to fully flourish by overcoming the threats posed by water shortage, sandstorms, rising world temperatures, and the encroaching deserts.
Reforestation is the natural or intentional restocking of woodlands that have been depleted, and is necessary to combat pollution in order to refresh these natural lungs of the country, through rebuilding natural habitats and ecosystems, but this requires diligent planning, expertise efforts, and seriousness by both the official organs and the general public for the sake of future generations.
In other words, the re-establishment of forests is not just simple tree planting, since forests are made up of a community of various species and they build dead organic matter into soils over time.
The Leader of the Islamic Revolution, Ayatollah Seyyed Ali Khamenei, has time and again expressed concern over the wanton destruction of forests for unplanned harvesting of timber for the wood factories or for building of urban areas.
True, the government has over the past years started the tree planting campaign with the top officials of the country personally putting in the saplings and then watering them to the click of cameras and in front of the TV, but these efforts, however, commendable, are not enough.
The basic thing is to put a full stop on the felling of the towering trees in the rainforests of the country, for whatever purpose, including expanding urbanization and industrialization, since if the current deforestation is continued, God forbid, Iran will have no forest in the next hundred years.
Thus, since forests and other types of vegetation play an important role in different aspects of life – ecological, cultural, commercial, economic and most important the survival of humanity through their absorption of excess rainwater and prevention of deadly floods – these should be fully protected.
For the fast developing wood industry, including paper mills, farmed trees ought to be used, otherwise it would be hypocrisy on our part to denounce the destruction of the Amazon, while the same trend, though on a smaller scale, continues in our country.
Source: Kayhan
Error Report
0