Demonstrations Against Police Violence Occupy Streets in US and UK

TEHRAN (Basirat)- Amid heightened tensions and fear for safety after deadly Dallas sniper ambush, Black Lives Matter protests against police violence took to the streets in major American cities and the UK 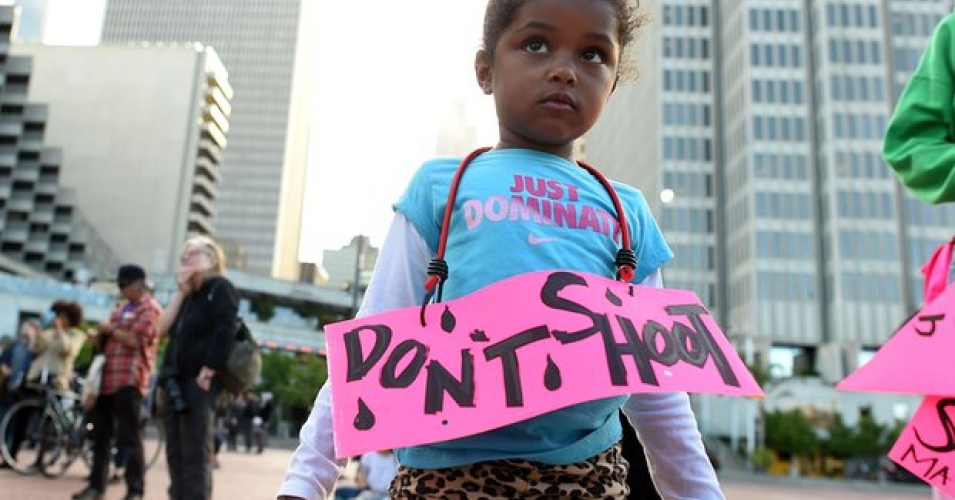 Amid heightened tensions and fear for safety after deadly Dallas sniper ambush, Black Lives Matter protests against police violence took to the streets in major American cities and the UK.

From Phoenix, Arizona, to London, UK, the cry was the same: "Black lives matter!"

On Sunday, protests took place across the pond in the UK in London, Brixton, and Bristol.

In the U.S., these latest protests occurred amid heightened tensions and fears for security after a lone gunman shot and killed five police officers and wounded seven people at a Black Lives Matter demonstration in Dallas, Texas, on Thursday.

The majority of the demonstrations on Saturday were reportedly peaceful, although there were reported clashes with police and widespread arrests in Rochester, New York, Baton Rouge, Louisiana, and St. Paul, Minnesota.

In Baton Rouge, prominent activist DeRay Mckesson was arrested by police while filming the demonstration. The Guardian reports:

Police in Baton Rouge arrested several protesters including DeRay Mckesson, a prominent figure within the Black Lives Matter movement, and were reported to be charging at other crowds of demonstrators. Officers seized Mckesson while he was peacefully broadcasting live footage of the demonstration from his cellphone. The reason for his arrest was unclear. Friends said he was taken away in a police van along with other detainees.

A photo of Mckesson's arrest circulated widely on Twitter, where some users also alleged that officers had been violent while arresting Mckesson:

As of Sunday morning, Mckesson remained in police custody.

Seventy-four people were arrested at the demonstration in Rochester, New York—including two journalists. Most of those arrested were charged with disorderly conduct, while two were charged with resisting arrest. The local police chief later apologized for arresting the reporters. Many others remained in custody as of Sunday morning.

In Minnesota, protesters shut down the large arterial I-94 for hours:

And a group of Indigenous dancers arrived to perform in solidarity with the demonstrators on the highway, while police looked on:

Local media reports that later in the evening some protesters threw fireworks, rocks, and bricks at police officers on I-94, leading to non-serious injuries to 21 officers. Ultimately, 102 people were arrested.

On Sunday, protesters on the other side of the Atlantic shut down Oxford Circus traffic and rallied outside of the U.S. embassy in London:

A demonstrator in Brixton, UK, reported that the takeaway message from the protest there was that "freedom is never given. You have to take it. Freedom isn't a distant dream, it's possible."

The recent killings of Alton Sterling and Philando Castile in Louisiana and Minnesota, respectively, have drawn nationwide attention again to the issue of systemic violence against black men and women at the hands of the police in the United States.

Indeed, as Shadowproof's Kevin Gosztola writes, "Police have shot more people in the first six months of 2016 than they did last year. There have been 491 people killed, according to the Washington Post. Black people continue to be killed at two-and-a-half times the rate of white people."

The killings[...] demonstrate a high level of structural and institutional racism. The United States is far from recognizing the same rights for all its citizens. Existing measures to address racist crimes motivated by prejudice are insufficient and have failed to stop the killings.

It is time, now, for the U.S. Government to strongly assert that Black lives matter and prevent any further killings as a matter of national priority.

Also on Friday, in response to the killings the Bahamas issued a travel advisory warning for its citizens traveling to the United States.

"In particular young males are asked to exercise extreme caution in affected cities in their interactions with the police," the advisory reads. "Do not be confrontational and cooperate."

As Michael Halpern, program manager of the Center for Science and Democracy, writes: "Our humanity is threatened by these conditions, and we must do all we can to confront and change them."