‘Trained Saboteurs’ Who Attack and Torch

TEHRAN(Basirat): Armed rioters have killed a police officer in Iran’s western city of Kermanshah, taking advantage of protests against a government decision to ration gasoline, police said on Sunday. 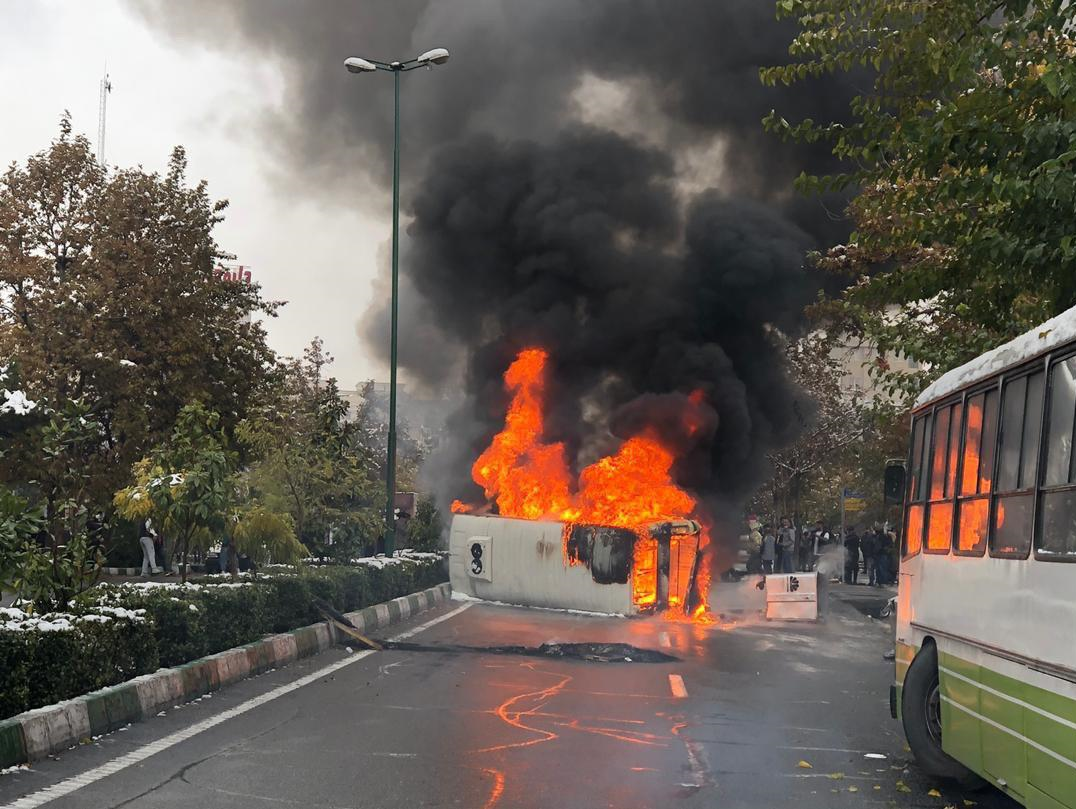 Brigadier General Iraj Javaheri was gunned down while trying to prevent armed rioters from overtaking a police station on Saturday. He was taken to hospital with gunshot wounds but succumbed to his injuries early Sunday.
Chief of police in Kermanshah province Ali Akbar Javidan said police would firmly confront any individual who attempts to create chaos and insecurity.
In Tehran, spokesman for the Iranian law enforcement forces General Ahmad Nourian said police will harshly deal with those undermining order and security.
The warning came after a preliminary assessment of damage done to the public property showed "trained saboteurs” took advantage of protests to set buildings on fire and attack police officers in various Iranian cities.
The assessment carried out an Iranian intelligence agency and published by Fars news agency estimated the number of people taking part in protests at 87,400.
They included about 82,200 men and 5,200 women, most of whom did not cooperate with rioters who engaged in unruly behavior.
The report showed a new spike in violence compared to the riots which took place last year. It said attacks on public buildings were totally organized.
"A large part of protesters were merely present at the location of rallies and did not cooperate with rioters, and many of them have received warning messages on their cellphones from security organizations to avoid further participation in protests,” the report said.
It noted that the conduct of the violent rioters proved that they were "completely trained,” and unlike ordinary people taken off guard by the surprise government decision to hike of fuel prices, they were totally prepared for riots.
"Out of 1,080 cities and counties across the country, small and large protest rallies were held in 100 locations nationwide with an estimated attendance rate of 50 to maximum 1,500 people,” the report said.
The extent of violence and destruction of public property, it said, was the highest in Khuzestan, Tehran, Fars and Kerman provinces.
The report said there is still no final tally on the number of casualties, but most of fatalities were related to attacks on police stations and other military sites, during which a yet unspecified number of police and ordinary people lost their lives.
"So far, about 1,000 people have been arrested across the country and more than 100 bank branches and 57 big stores have been set on fire or sacked in one province alone,” the report said.
Iran’s Intelligence Ministry said Sunday main elements behind violent riots have been identified and that appropriate measures are being taken against them.
In a statement, the ministry stressed that it is duty-bound to take serious action against hooligans or any element undermining security and peace.
"The statement reminded the enemies that they will achieve nothing but frustration and humiliation,” Tasnim news agency reported.
Source: Kayhan
Error Report
0