TEHRAN (Basirat)- A new leak provides further confirmation that the pro-corporate TransAtlantic Trade and Investment Partnership (TTIP) between the U.S. and European Union would result in "a giant leap backward in our fight to keep fossil fuels in the ground." 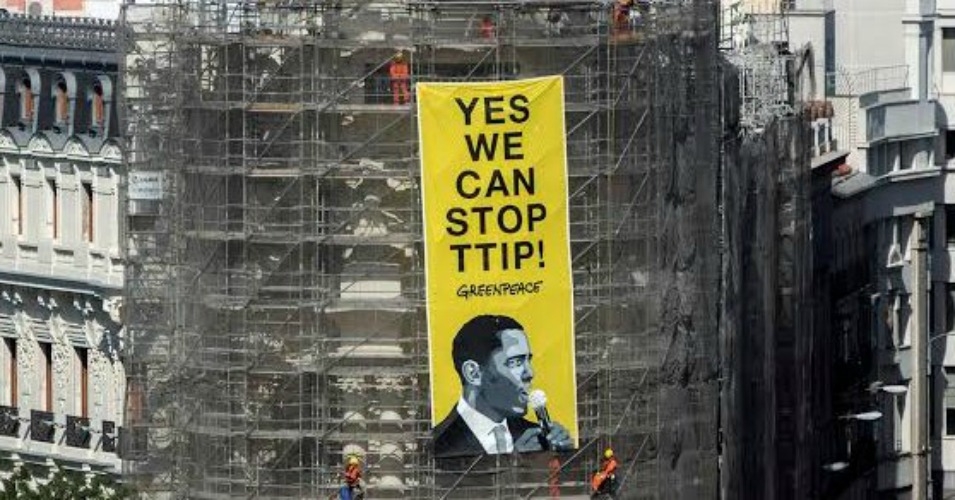 A new leak provides further confirmation that the pro-corporate TransAtlantic Trade and Investment Partnership (TTIP) between the U.S. and European Union would result in "a giant leap backward in our fight to keep fossil fuels in the ground."

As the 14th round of TTIP negotiations started in Brussels on Monday, the Guardian reported that the latest draft of the agreement "could sabotage European efforts to save energy and switch to clean power."

The draft energy chapter obtained by the Guardian "shows that the EU will propose a rollback of mandatory energy savings measures, and major obstacles to any future pricing schemes designed to encourage the uptake of renewable energies," wrote reporter Arthur Nelson.

According to a Sierra Club analysis of the leak, the TTIP proposal would:

"This leaked document goes farther than any past leaked or publicly available TTIP document on energy to reveal the threat that the deal poses to our efforts to protect our climate by fully transitioning to clean energy," said Ilana Solomon, director of the Sierra Club's Responsible Trade Program.

"For example," she said, "never before have we seen a more explicit and sweeping assertion that all gas export restrictions in the United States should be wiped out under TTIP—a nightmare that would be a giant leap backward in our fight to keep fossil fuels in the ground."

Paul de Clerck of Friends of the Earth Europe (whose analysis is here, pdf) concurred that the language of the proposal would lead to "more fracking in the U.S. and more imports of American fossil fuels to Europe." To that end, he said, the leaked chapter "is in complete contradiction with Europe's commitments to tackle climate change, and the Paris agreement."

What's more, he added, "It will flood the EU market with inefficient appliances, and consumers and the climate will foot the bill. The proposal will also hinder measures to promote renewable electricity production from wind and solar."

Greenpeace told Deutsche Welle, for instance, that German legislation giving renewable energy preferential access to the national grid would be regarded as illegal under the TTIP as written. Earlier this year, Germany produced so much energy from its solar, wind, hydro, and biomass plants that power prices went into negative territory for several hours—a milestone credited at the time to a people-powered "energy revolution."

"Should this proposal become part of the free trade pact, Germany's shift to renewable energy is in mortal danger," Greenpeace spokesman Christoph Lieven said in a statement.

And Green MEP Claude Turmes told the Guardian: "These proposals are completely unacceptable. They would sabotage EU legislators' ability to privilege renewables and energy efficiency over unsustainable fossil fuels. This is an attempt to undermine democracy in Europe."

Monday's revelations are just the latest to suggest that the TTIP—like other so-called "free trade" deals currently under negotiation—would negatively impact the environment, human rights, and democratic principles on both sides of the Atlantic.

But opponents have hope. The latest round of negotiations comes as the TTIP is on increasingly shaky ground, a fact that did not go unobserved by Global Justice Now executive director Nick Dearden.

"With senior political figures from France and Italy signaling that the deal is dead in the water, surely [European Commissioner for Trade Cecilia] Malmström should call time on this failed corporate coup," Dearden said on Monday.

"The toxic trade deals being pushed by Brussels would only benefit tiny financial elites, while the ordinary people of the EU would be stripped of legal protections of labor rights, consumer standards and public services," he continued. "If the EU is going to prevent further disintegration after Brexit, it needs to stop prioritizing corporate power grabs and start addressing issues such as rising inequality and social exclusion."

Meanwhile, another TTIP leak has been published today by the German investigative site Correctiv.org. Ironically, one of the issues it mentions is how to stop further leaks about TTIP, which apparently continue to annoy the US negotiators. According to the leaked document, the commission apparently plans to bring in more controls for MEPs when they visit the official TTIP reading room. This includes "better control of electronic devices, especially with hidden cameras, a second attendant [that is, guard] with six or more people present, and only giving out three documents at a time."

According to Friends of the Earth Europe, this week will see yet more public demonstrations against the deal, as part of TTIP Game Over, a citizen's initiative calling for direct, non-violent action.