TEHRAN (Basirat): Iranian Government Spokesman Ali Rabiyee blasted the US officials' lies about the number of people killed in the recent riots in Iran, and warned that Washington's confession to its engagement in the recent unrests in Iran substantiates a case of war crime. 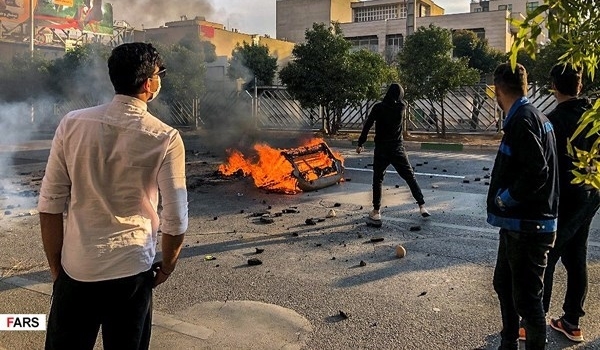 "The clear remarks uttered by the US officials these days about Iran and attributing them (the recent riots in Iran) to their efforts, is a war crime and international crime," Rabiyee told reporters in a press conference in Tehran on Monday.
He further strongly rejected the US claims that thousands have been killed in the recent riots in Iran, saying that the allegations of the American officials are all lies.
The spokesman also said the Iranian officials will announce the precise numbers in each province later, reminding that the number of the Law Enforcement policemen wounded in the recent riots was larger than the ordinary citizens injures.
Trump administration on Thursday accused Iranian security forces of killing more than 1,000 people in the recent unrests.
The estimated death toll is significantly higher than previously estimates from human rights groups and others, and the administration did not present documentary evidence to back up the claim.
On November 15, the government raised Iran’s extremely cheap gas price in order to moderate the national consumption rate, which stands at 110 million liters per day, 40 million liters above the maximum domestic requirement.
The government also announced a number of aid and subsidiary programs to protect vulnerable households from the adverse effects of the measure.
The price reform, required by Iranian legislature and essential as US-imposed sanctions seek to deplete Iran's budgetary resources, had been long delayed due to concerns regarding the move's probable backlash.
The measure's adoption prompted initially peaceful protests, but riotous elements, abusing the situation, quickly entered the scene, destroying public property, setting ablaze banks and gas stations among other facilities, and opening fire on people and security forces.
Intelligence reports and eye-witness accounts showed that the rioters who had taken advantage of public protests against gasoline price hikes to stir chaos in the country were armed with different weapons.
In relevant remarks last Tuesday, Iran's Judiciary Spokesman Gholam Hossein Esmayeeli announced that armed rioters and outlaws wounded and killed a number of people and policemen during the recent unrests after the protest rallies against the gasoline rationing.
"It is confirmed that a considerable number of people have been killed by the outlaws and many officers who were trying to establish order have also been wounded by the weapons of these outlaws too," Esmayeeli told reporters in a press conference in Tehran.
He said arson attacks and plundering the banks and stores and killing of innocent people and police officers were all carried out by the hooligans who were affiliated to the anti-revolutionary and dissident groups and were supported by the foreign spy agencies.