TEHRAN(Basirat): A number of Iraqi lawmaker have voiced opposition to President Barham Salih’s decision to resign, saying they were stunned by the decision. 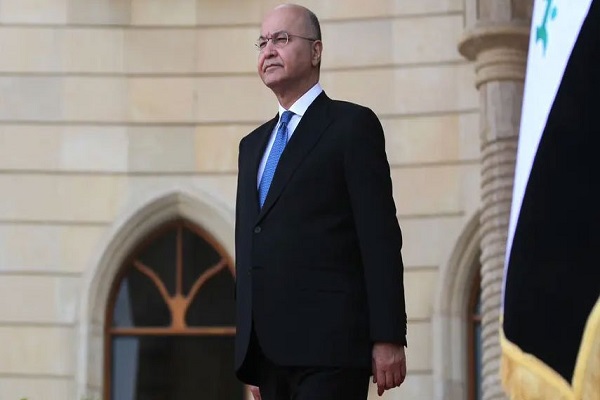 On Thursday, Salih submitted his resignation to parliament after refusing to designate the nominee for premiership, Assad al-Eidani, arguing that he would rather step down than appoint the position to a figure strongly rejected by protesters.

He said since the constitution of the Arab country did not give him the right to reject a nomination, he would rather resign than pick a new premier rejected by demonstrators.

“I apologize for nominating Assad al-Eidani for the role of prime minister,” he wrote in his letter to parliament, adding, “I prefer to resign than to nominate another candidate and this is for the interest of the public.”

Salih stressed that the protest movement made it imperative that politicians look at the interests of the public over personal or political considerations.

“It is better for me to resign rather than to assign an individual that is objected by the protesters to form a government,” he added.

A number of parliamentarians from different parties and alliances, however, say they oppose the resignation since Iraq is going through difficult conditions.

The Nasr (victory) Alliance led by former prime minister Haider al-Abadi in a statement urged Sailh to withdraw his resignation, adding that continuation of the current situation could lead Iraq to unknown directions.

The Iraqi lawmakers will now have to meet to discuss Salih’s resignation and vote on it. If they endorse his move, the veteran politician will step down.

The development came just a day after parliament’s Binaa bloc nominated 59-year-old al-Eidani, the governor of Basra and a former minister of youth and sports, for the role of prime minister.

Overnight on Wednesday, protesters in capital Baghdad blocked roads and bridges and in southern parts of the city they torched a number of buildings in response to the announcement of al- Eidani’s nomination.

Similar rallies were held in Nasiriyah, Basra and Diwaniyah. Reports said some of the roadblocks had been removed in the morning.

The protests, which began on October 1, have been pressing the government to bring in reforms that would root out corruption and alleviate the country’s economic woes.

The rallies, however, soon turned violent -- amid reports of foreign interference – killing hundreds of people, including members of the security forces, the Parliament’s Human Rights Commission says.

Last month, Prime Minister Adel Abdul Mahdi stepped down amid the anti-government rallies, but retains the position as caretaker premier.