TEHRAN (Basirat)- France has been stunned and sickened by a third massacre in 18 months in which a truck driver mowed down night-time crowds celebrating Bastille Day on the seafront in Nice. He killed at least 84 people and injured scores more, many of them small children. 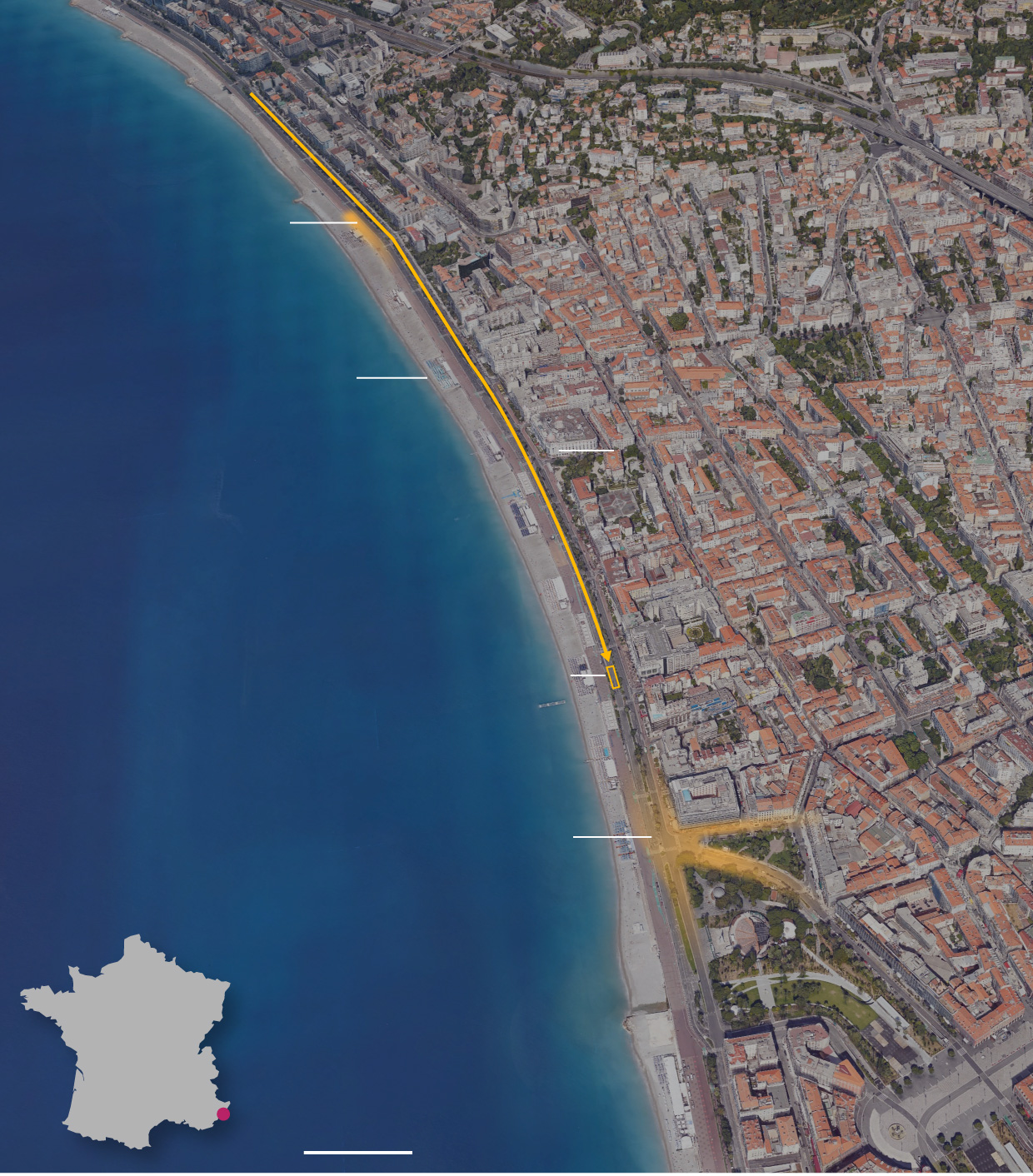 France has been stunned and sickened by a third massacre in 18 months in which a truck driver mowed down night-time crowds celebrating Bastille Day on the seafront in Nice. He killed at least 84 people and injured scores more, many of them small children.

The armed man, believed to be a 31-year-old French Tunisian who lived locally, zigzagged the vehicle at high speeds for more than a mile along a beachfront esplanade, instantly turning a festival atmosphere of fireworks and families into carnage. Police shot him dead inside the truck’s cabin.

The atrocity was the third major attack to hit the country since the start of last year, following the Charlie Hebdo killings and the massacre of 130 people in Parisin November.

The French president, François Hollande, extended a nine-month state of emergency for another three months, declared three days of national mourning starting on Saturday and then flew to the scene of the outrage.

"We we are facing a long battle because we have an enemy who will continue to hate all the people who enjoy liberty,” he said after visiting the bedside of survivors. In all, 202 people were injured in the attack, with 25 still on life support and 52 in critical condition.

Condolences poured in from around the world and officials in London and Washington said leaders were being briefed on the situation. Solidarity rallies were announced in at least a dozen French towns and cities for the weekend.

Investigators began searching a local apartment after finding identity papers in the truck cabin belonging to a French-Tunisian man named locally as Mohamed Lahouaiej-Bouhlel. Locals said he did not appear particularly religious.

Reports said the attacker was known to police for lower-level crimes, such as theft and violence, but had not been put on a watchlist by French intelligence services.

The Paris prosecutor’s office opened an investigation for "murder and attempted murder in an organised group linked to a terrorist enterprise”. Despite the early judgment that this was a terrorist attack, no group had claimed it.

Two grim details stood out from Thursday night’s events. First, the use of a truckis rare among the many massacres perpetrated against western civilians over the past 10 years.

Second, the number of small children killed and injured was higher than in any other European massacre of recent years. At least 10 are thought to have died, and medical sources said another 50 had been taken to hospital overnight, many with life-threatening injuries.

Also among the victims were at least three Germans, two Americans and one Russian national.

The horror began shortly before 11pm when the truck somehow gained access to the Promenade des Anglais and began slewing into bystanders and revellers. Officials said the driver wove along the road, knocking people down "like skittles”, for a distance of at least 2km.

Video footage showed the 19-tonne white truck speeding up as it drove into the screaming crowds while several people tried to chase it on foot.

Witnesses said people pushed each other out of the way, jumped down to the beach and even ran into the sea to avoid the vehicle.

Jaqueline Lacour and her companion George Pellet were sitting on their beachfront balcony watching the fireworks when chaos broke out.

A local official said that the truck was only brought to a stop by the heroics of a person who tried to jump on to its front. The attacker then opened fire before police killed him with a volley of shots through the windscreen.

As investigators continued to comb the vehicle, questions were being asked as to how the truck managed to get down to the waterfront. The city centre has restrictions on heavy lorries, and there were additional security restrictions for the festival including metal barriers that he apparently opened.

"I saw two sisters and one brother from Poland that were mourning the death of their two other siblings. There were so many Muslim people who were victims because I could see they had scarves over their head and some were speaking Arabic.”

A spokesman for the British prime minister, Theresa May, said she was being kept up to date on events, adding: "Our thoughts are with all those affected by this terrible incident on what was a day of national celebration.”

The White House said Barack Obama was being kept updated. The president condemned "what appears to be a horrific terrorist attack in Nice” and said he had directed his team to offer any assistance France might need in its investigation.
Analysis Nice attack is a crisis for presidency of François Hollande
France’s security policy and Hollande’s leadership were already under the spotlight following the devastating attacks in Paris in November
Read more

But domestically, Hollande came under pressure to do more to shore up security. Marine Le Pen, the Front National leader and a rival for next year’s presidential election, called for a "war on Islamic fundamentalism” saying that all that had happened so far was a "war on words”.

"Nothing that we have proposed has been put in place. Considering the new nature of terrorism which is now a terrorism of opportunity, that’s to say without hierarchical structure, the urgency is to attack the ideology on which this terrorism is based.”

Alain Juppé, a centre-right presidential hopeful, said: "We know there are faults and shortcomings - the parliamentary inquiry after the November attacks showed us that. We must absolutely lead this struggle against radicalisation and better coordinate our intelligence services.”

On Friday morning, the picturesque resort was all but deserted, beaches empty, cafés deserted, the esplanade cordoned off and the white goods truck visible from a distance, its windscreen pockmarked with bullet holes and its front buckled.

On the street, Piero Bianculli, 37, an Italian musician who grew up in Nice, said he had been at his stepfather’s apartment on the beachfront watching the firework display from the balcony when the lorry hit.

"We had been invited over to watch the fireworks because he had such a beautiful view of the sea,” Bianculli said. "Suddenly we saw people in the street running and screaming. We thought it was a false alarm or some sort of joke, but when I looked to the right I saw bodies flying in the air, and people thrown to the ground who didn’t get up.

"I took my binoculars and looked all the way up the promenade, and saw dead bodies lying scattered where they had fallen, bleeding. There was blood streaming across the street.”

Others who had witnessed the attack were seen wrapped in blankets, shaking their heads and crying. Restaurant owners on the beachfront described sheltering panicked crowds.

A man in a white blanket, haggard and dazed, limped down the street as neighbours tried to hold him up.

"He’s lost his whole family,” said a woman, crying behind her sunglasses.