TEHRAN (Basirat) : In an extraordinary session on Sunday, the Iraqi parliament voted for a resolution requiring the government to order the withdrawal of U.S. troops from Iraq. 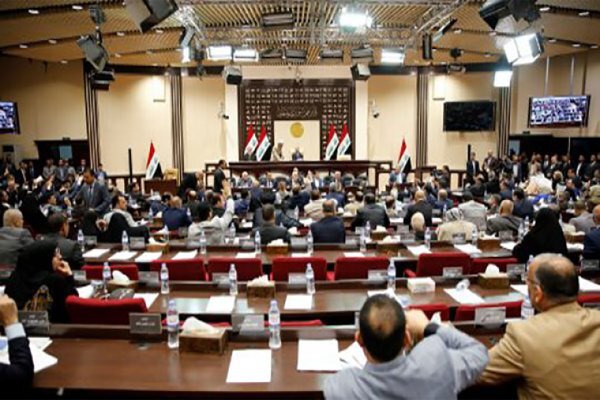 The session came two days after a U.S. drone strike on a convoy at Baghdad airport which killed Iranian military commander Qassem Soleimani and Iraqi Popular Mobilization Forces (PMF) deputy chief Abu Mahdi al-Muhandis.
“There is no need for the presence of American forces after defeating Daesh,” said Ammar al-Shibli, a lawmaker and member of the parliamentary legal committee.
“We have our own armed forces which are capable of protecting the country,” he said, Reuters reported.
Around 5,000 U.S. troops remain in Iraq, most of them in an advisory capacity.During a massive funeral procession for General Soleimani, the commander of the IRGC Quds Force, and al-Muhandis in Baghdad, al- Kadhimiya, Karbala and Najaf, hundreds of thousands of angry Iraqi mourners carried placards demanding an immediate expulsion of “U.S. terrorists” from their country.
In the face of the Iraqi people’s will, the Iraqi parliament made a historic test about by voting to expel the U.S. troops.
Expelling Iraqi troops had turned into a “national demand” after the terrorist attacks on the top Iranian and Iraqi military commanders.
Following the terrorist attack by the U.S., Iraqi caretaker Prime Minister Adel Abdul Mahdi had asked the parliament to take a decision based on Article 58 of the Iraqi constitution about the “illegal action” of the U.S. army.
The prime minister said the U.S. move was a violation of the Iraqi sovereignty and an affront to national pride.
The prime minister called the U.S. act a dangerous move which will trigger another devastating war in Iraq and the region.
Since the U.S. terrorist attack, rival political leaders had  been calling for expulsion of U.S. troops from Iraq in an unusual show of unity among factions.
Hadi al-Amiri, the top candidate to succeed al-Muhandis, repeated his call for U.S. troops to leave Iraq on Saturday during an elaborate funeral procession for those killed in the attack.
Iraqi Parliament Speaker Salim al-Jabouri has expressed anger over the U.S. attack on the military convoy, saying, “What happened around Baghdad airport was an open violation of the Iraqi territorial sovereignty and violation of international agreements.”
He added, “Any security and military operation should be with the agreement of the government.”
Faleh al-Fayad, Iraq’s national security advisor and chief of Hashd al-Shaabi or PMF), has also said it is the duty of the Iraqi government and judiciary to respond to the violation of the Iraqi sovereignty.
Also, Abdelkarim Khalaf, spokesman for the Iraqi Armed Forces has said "these strikes represent a treacherous stab in the back."
Source:TehranTimes
Soleimani martyrdom won’t change path of Resistance: Ismail Haniyeh
Trump is a symbol of ignorance, says Soleimani's daughter
Ayatollah Khamenei Leads Ritual Prayers at General Soleimani’s Funeral
Sayyed Nasrallah: Suleimani’s Shoe Worth More Than Trump’s Head
Holy Mashhad mourns Lt.Gen. Soleimani martyrdom
Iranian FM: US Should Account for Repercussions of Assassination of General Soleimani
Iran’s Response Will Be against Military Sites, Adviser Says
US Not Prepared for Consequences of Gen. Soleimani’s Assassination: Analyst
Soleimani was a “culture” and a culture cannot be assassinated
Tags: basirat ، Qassem Soleimani ، massive funeral ، IRGC Quds Force ، U.S. troops ، Iraqi sovereignty
Error Report
0