TEHRAN (Basiart) : The body of top Iranian General Qassem Soleimani is being laid to rest in his hometown of Kerman, Iran on Wednesday morning. 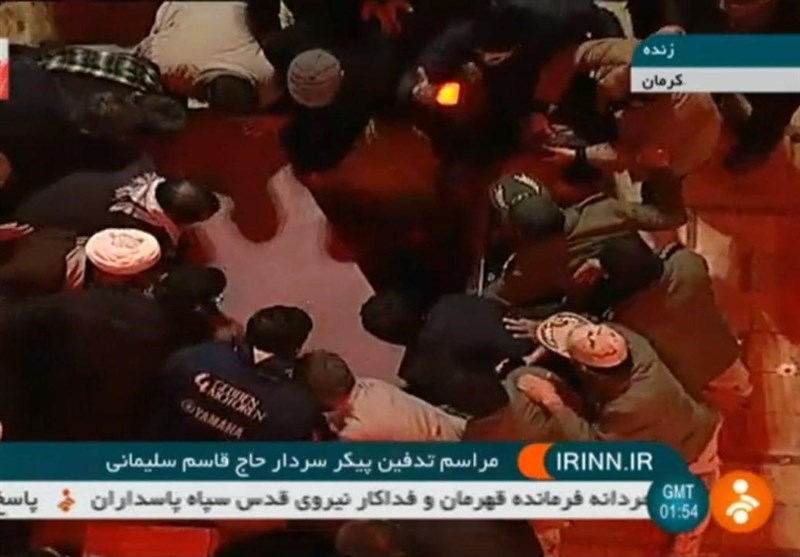 His burial comes shortly after Iran’s Islamic Revolution Guards Corps (IRGC) on Wednesday targeted the US airbases in Iraq, including Ain al-Assad base in Anbar province in western Iraq to retaliate the top commander’s assassination.
“We warn the Great Satan, the bloodthirsty and arrogant regime of the US, that any new wicked act or more moves and aggressions (against Iran) will bring about more painful and crushing responses,” the IRGC said in a statement on Wednesday, after its forces targeted the US airbase of Ain al-Assad in Anbar province, western Iraq, and then launched a second wave of attacks.
“We are warning all US allies who gave their bases to its terrorist army that any territory that in any way becomes the starting point of hostile and aggressive acts against the Islamic Republic of Iran will be targeted,” the statement added.
The attack was later confirmed by the US officials.
The attack on the US major airbase in Iraq came after Iran pledged to retaliate the US assassination of top Iranian anti-terror commander, Lt. Gen. Soleimani.
General Soleimani, the deputy head of Iraq’s Hashd al-Sha’abi (PMU), and a number of their entourage were killed in a strike by American drones near Baghdad International Airport in the early hours of Friday.
The White House and the Pentagon confirmed the assassination of General Soleimani in Iraq, saying the attack was carried out at the direction of US President Donald Trump.

Source: At Least 80 Americans Killed in IRGC Attack on US Base in Iraq
Iran’s Admin. Thanks IRGC for Retaliatory Attacks on US
Top General Warns of Iran’s Stronger Response to Any New US Attacks
Last night’s action was merely a slap, but the U.S. must leave the region
Iran Hits US Base in Iraq in Retaliation Attacks after US Killing of Gen. Soleimani
Iran Designates Pentagon as Terrorist Organization
Gen. Soleimani’s body in hometown for burial: Millions join Kerman funeral
Tags: basirat ، IRGC ، General Soleimani ، Kerman ، Donald Trump
Error Report
0