Tehran(Basirat): Iran's Foreign Minister Mohammad Javad Zarif tweeted on Thursday that Trump's so-called "Beautiful military equipment" does not rule the world and the regional peoples want to see US Forces expelled from this region. 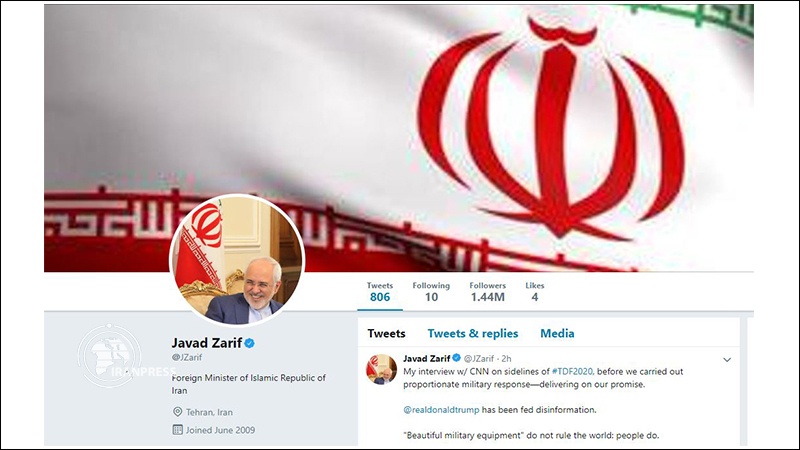 Iran's Foreign Minister Mohammad Javad Zarif stressed in his latest tweet released on Thursday morning that his interview with CNN television channel has been before Iran's proportionate military response to deliver its promise.
The top diplomat while referring to Donald Trump's' tweet released on January 4, warned that "Beautiful military equipment" do not rule the world: people do. And people of our region want the U.S. out. and condemned Trump's feeding disinformation about all this.
"Beautiful military equipment" do not rule the world: people do.
Earlier on January 4, the US President Donald Trump has tweeted that the United States just spent two trillion Dollars on military equipment claiming the US to be the biggest and by far the BEST in the World, Trump went on to continue with his so-called warning that" If Iran attacks an American Base or any American, we will be sending some of that brand new beautiful equipment their way and without hesitation!"
However, in the early hours of January 8, the IRGC's aerospace unit launched a successful attack against US forces in Ain al-Assad airbase in western Iraq and another in Erbil, in the north of the country.
The attack came in response to a US terrorist drone strike days earlier that martyred one of Iran's top Generals, the former Commander of IRGC's elite Quds Force, Lieutenant General Qassem Soleimani.
The Leader of the Islamic Revolution Ayatollah Seyyed Ali Khamenei described the attack as a “slap in the face” for the Americans and Iran's Foreign Minister Mohammad Javad Zarif called it a "proportionate measure" which came "in self-defense".
Pulling back from his so-called harsh stance and in response to the recent Iranian missile attack on US positions in Iraq as retaliation for assassinating Lieutenant General Qassem Soleimani, US President Donald Trump delivered a speech stating the US does not intend to use force but imposes more sanctions instead.