TEHRAN (Basirat) : People in Palestine and other parts of the world held demonstrations in condemnation of a new Middle East plan proposed by US President Donald Trump, as Palestinians have dismissed the so-called deal of the century as a "conspiracy". 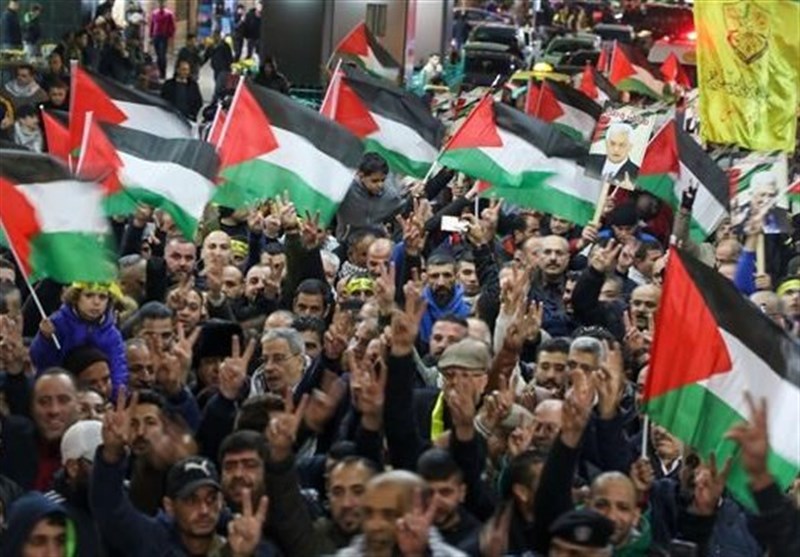 Thirteen Palestinians have been injured by Israeli forces as thousands demonstrated against the US president’s so-called peace plan in the occupied West Bank.
Protesters walked through the streets of Gaza city, chanted slogans to show their rejection to the deal. They lifted banners such as "The one who doesn't own (USA), grants who doesn't deserve (Israel)," and "The deal of shame shall not pass."
One person was taken to the hospital after being hit with a rubber bullet in the city of Ramallah and 12 others suffered exposure to tear gas, according to Press TV.
Palestinian leaders have also rejected Trump's peace proposal as an unacceptable capitulation to Israel that tramples on the long-standing aspirations of their people.
Palestinian president Mahmud Abbas vowed the initiative unveiled in Washington would fail.
"This conspiracy deal will not pass. Our people will take it to the dustbin of history," he said after a meeting in the West Bank city of Ramallah of various Palestinian factions including Islamist group Hamas, which pledged to "resist the deal in all its forms".
Trump's proposal included a long list of measures directly in line with Israeli interests, notably recognition of Jerusalem as the "undivided capital" of the Jewish state, AFP reported.
"If Jerusalem is not the capital of the Palestinian state, how will we accept that?" Abbas asked, stressing that it was "impossible for any child, Arab, Muslim or Christian," to do so.
Senior Hamas official Khalil al-Hayya said the Islamist group which controls Gaza would never "accept any substitute for Jerusalem as the capital of the Palestinian state".
"We warn the whole world not to go along with this deal," he said.
Trump's plan triggered immediate condemnation on the streets of the Gaza Strip and the West Bank, with demonstrations expected to continue through the week.
Palestinians have denounced Trump's so-called 'deal of the century' to end the Israeli-Palestinian conflict with the Palestinian President Mahmoud Abbas calling on all Palestinian factions for a meeting on Tuesday to coordinate a unified action.
Trump unveiled his set of proposals for the Middle East peace process in a joint statement with Israel Prime Minister in Washington, D.C., on Tuesday.