TEHRAN(Basirat): Iranian scientists at Khajeh Nasireddin Tousi University in Tehran developed stationed and mobile thermometer production technology to control body temperature of moving crowds as the nation has mobilized all its possibilities against the spread of the coronavirus. 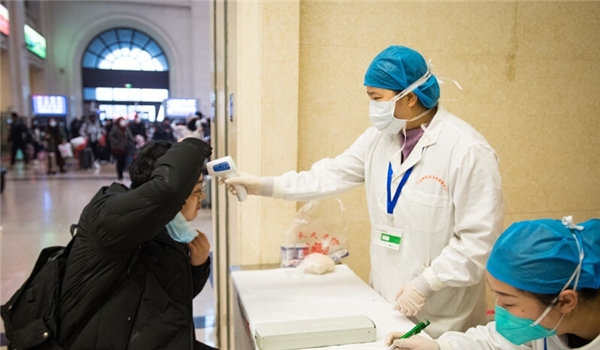 The stationed model can be mounted at the gates of different organizations, markets and airports to measure the body temperatures of passers-by. When a person’s body temperature is higher than normal the system sends an alarm to the control room.

It also saves and stores data on the number of people whose body temperatures are measured to be used for later analysis.

The system also has a mobile version which can be applied by the health ministry authorities to control the body temperatures of people in streets and the entrance gates to cities and towns.

Commander of the Iranian Ground Force Brigadier General Kiomars Heidari announced on Sunday that army researchers had developed several tools to diagnose patients infected with COVID-19 virus in a much shorter time compared with conventional kits and methods.

“Our dear colleagues in the Self-Sufficiency Jihad section of the Army’s Ground Force have built several unique tools which have been sent to the health ministry. If approved, we have attained a very big achievement in the field of rapid and online diagnosis of coronavirus,” General Heidari said.

On Tuesday night, the WHO announced that more than 90,000 people worldwide have been diagnosed with the disease. The new virus has killed over 3,200 people in the world so far.

The coronavirus is spreading in the Middle East, Europe and other parts of the world, while parts of China begin to lower their emergency response level as the number of new cases reported there continues to slow.

The number of coronavirus deaths in the US rose to nine on Tuesday, according to health officials. All of the deaths occurred in Washington state.

There were more than 100 cases in 15 states as of Tuesday night, with New Hampshire, Georgia and North Carolina being the most recent to join the battle against the virus.

The number of patients firmly diagnosed with coronavirus infection in Iran has reached 2,922, health ministry announced on Wednesday, raising the number of deaths to 92.

It added that 552 coronavirus patients have been cured and discharged from hospitals across the country.

Reports from different cities and towns of Iran indicate strenuous efforts by the officials to help the coronavirus patients and prevent an epidemic.

As a preventive measure, Iranian authorities have ordered closure of educational and cultural institutions as well as gyms across the country as of weekend.

Tehran’s municipality announced that all the city’s public places, including the metro trains and buses, are being disinfected at the end of the line every hour as part of attempts to contain the spread of the virus.

Head of Food and Drug Administration Mohammad Reza Shanehsaz also said that pharmacies will no longer be allowed to sell protective masks and that masks will be distributed among the population via government-run centers free of charge, with the priority given to virus-hit provinces.

Iran’s Foreign Ministry hosted a meeting last week to brief a WHO representative and the foreign ambassadors residing in Tehran on the latest preventive and therapeutic measures taken by the country to contain COVID-19, as the novel coronavirus is called.

In comments at the meeting, the WHO representative said Iran has the necessary fundamental capabilities to tackle the epidemic, and that Tehran’s performance has been as “successful and exemplary” in the region and the world.

The Iranian Health Ministry officials, who were also present at the meeting, reaffirmed Iran’s commitment to the international health regulations and standards.

Iran enjoys all the technical and specialized capabilities needed to battle the coronavirus, they stressed.