TEHRAN(Basirat): Panic is prevailing in the US over the safety of prisoners amidst the outbreak of the deadly Coronavirus after a guard disclosed that there are no disinfectants in a Metropolitan Detention Center in New York, as the country recorded more than 20 deaths, with over 570 patients. 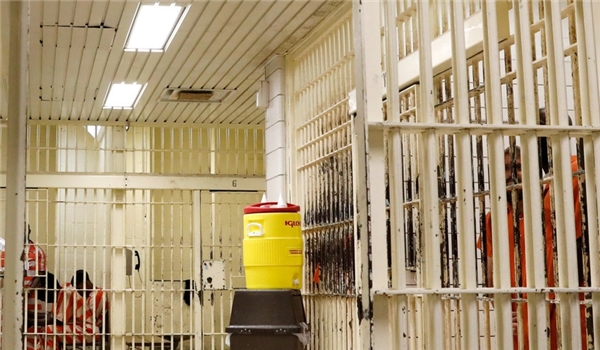 There have been no reports of COVID-19 inside US jails, but a staff in Brooklyn facality revealed that prisons could become hot spots in the coronavirus-hit country due to the lack of "hand sanitizer or soap", as coronavirus has reached more than 30 states.

No information is available on the health status of other US prisons after the fatal disease had spread across the country.

Got a dispatch today from someone that visited the the MDC Federal Prison in Brooklyn where there was ***no hand sanitizer or soap*** and a guard begged the visitor to send word that they are in danger if the virus hits the facility.

The Associated Press had reported that US jails and prisons are on high alert, stepping up inmate screenings, sanitizing cells and urging lawyers to scale back in-person visits to prevent the coronavirus from spreading through their vast inmate populations, but it seems the measures have remained just in words.

Jail operators in the US are coming to the growing realization that it’s only a matter of time before it strikes in prisons.

“Jails are, you know, just prime opportunities for something like this to spread,” Bossier Parish Sheriff Julian Whittington, the President of the Louisiana Sheriff’s Association, said, adding, “I’m a realist and I suspect more than likely sometime it’s going to pop up in somebody’s jail.”

Health officials have been warning for more than a decade about the dangers of outbreaks in jails and prisons, which are ideal environments for virus outbreaks, as inmates share small cells with total strangers, use toilets just a few feet from their beds, and are herded into day rooms where they spend hours at a time together. Inmates go in groups to court, where they wait together in cramped holding areas. Many are poor, meaning that when they're released they often must get on public buses or trains to get home.

Reports of illness spreading in a jail are fairly common, and occasionally outbreaks of influenza have required quarantine. In 2013, an outbreak of the stomach flu at Cook County Jail in Chicago, the largest single site jail in the United States, prompted the quarantine of 700 inmates.

In 2018, inmates across several US states launched a three-week prison strike, protesting what they call racist sentencing laws, inhumane conditions, and lack of pay for prison labor that amounts to slavery. They published a 10-point list of demands, centering on restoring the voting rights of prisoners and ex-convicts and treating those imprisoned with dignity.

In 2019, the sorry state of a California prison, with mice falling on dining tables and mold growths covering the walls, has prompted inmates to sue the management, as lawyers had stated it is part of a systemic infrastructure decay problem.