TEHRAN(Basirat): Syrian Army troops discovered one of the hideouts of the leader of Al-Nusra Front Abu Mohammad al-Jolani, in Anjara region 15 kilometers West of Aleppo city. 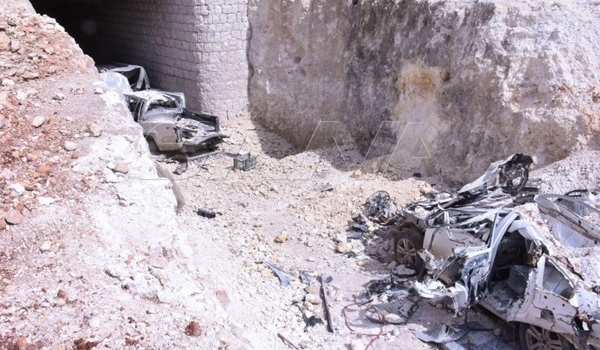 The Syrian Army found al-Jolani's hideout during military operations in the sorrounding areas of Aleppo City.

The Al-Nusra leader's bastion was in Anjara region located 15 kilometers to West of Aleppo city.

Al-Jolani had directed terrorist attacks on Aleppo city and villages in its countryside from the hideout.

The local geography added natural fortification for the underground hideout which consisted of several rooms, including operations rooms and living quarters, complete with ventilation, lighting, and multiple entrances and exists.

The operations rooms included blackboards, lighting and communication equipment, and topographic maps. The hideout also contained vehicles that had been used by the leaders of terrorist groups.

In a relevant development in January 2016, the Syrian Army jets  destroyed terrorist groups’ hideouts and concentration points in Hraytan town in Aleppo province, destroying their vehicles and supply routes.