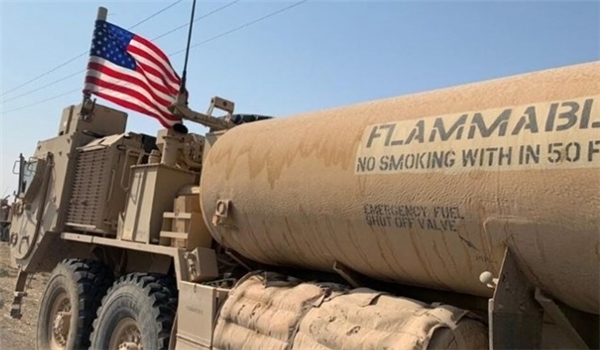 In line with implementation of the US policies concerning the plundering of Syria's oil, the Washington-backed SDF has started plundering the Arab country's oil resources, the Arabic-language Al-Watan newspaper quoted opposition sources as saying.

It noted that an oil company which is close to the Al-Nusra Front terrorist group has reduced the oil prices after importing crude from Kurdish-dominated areas.

In a relevant development in December 2019, Syrian Presidential Adviser Bouthaina Shaaban said in an interview with the Beirut-based pan-Arab Al-Mayadeen TV that the Damascus government is looking into the possibility of suing Washington in an international court over the plundering of Syria's oil reserves,.

"Syria is looking into the possibility of filing an international lawsuit against the United States, due to the fact that they steal Syrian oil," she stated in the interview.

US President Donald Trump announced US troop pullout from the zone of the Turkish military operation in Northern Syria this fall, but said that his country would not give up control over oil fields in the north of the Arab republic.

The Russian Defense Ministry has announced that the United States were smuggling Syrian oil to other countries, while oil caravans are guarded by US private security companies and special forces.

US Special Representative for Syria James Jeffrey noted his country’s presence in the region was legitimate as Washington wants to make sure that oil deposits in the Northeast of the republic do not fall into the hands of terrorists.

In late November, Jeffrey stated that in line with the Syrian constitution, the oil belongs to the people of Syria.