TEHRAN(Basirat): One of the happiest and most indigenous celebrations in Iran is the Qashqa’i wedding. The people of this tribe do their best to hold a glorious ceremony. 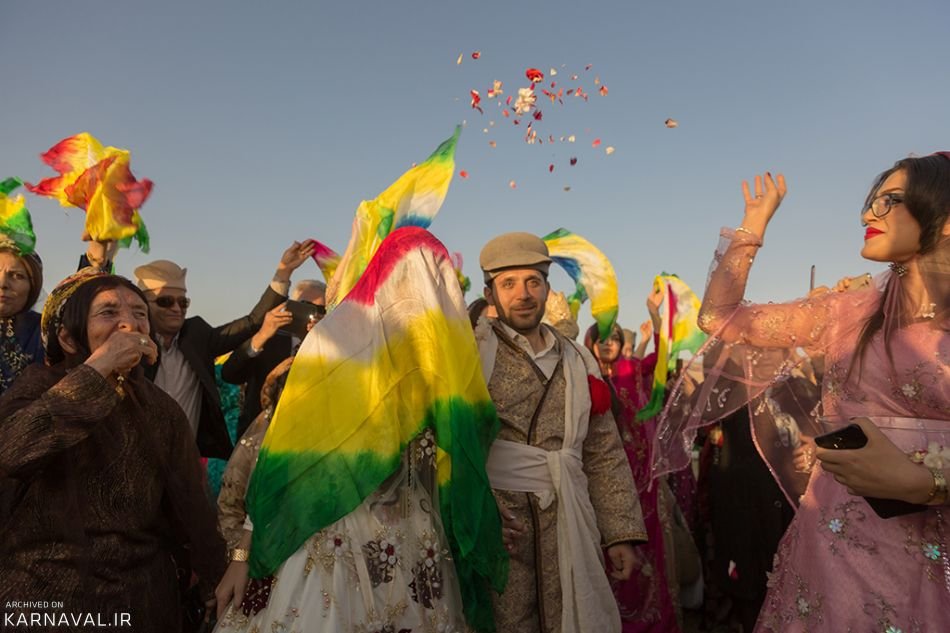 Qashqa’i is a conglomeration of clans in Iran consisting of mostly Turkic peoples but also Lurs, Kurds and Arabs. The Qashqa’i mainly live in the provinces of Fars, Khuzestan, Kohgiluyeh and Boyer-Ahmad, Chaharmahal and Bakhtiari, Bushehr, and southern Isfahan, especially around the cities of Shiraz and Firuzabad in Fars.

The majority of Qashqa’i people were originally nomadic pastoralists and some remain so today. The traditional nomadic Qashqa’i travelled with their flocks twice yearly to and from the summer highland pastures. The majority, however, have now become partially or wholly sedentary.

The presence of different ethnicities in Iran has led to different ceremonies in each community with special rituals.

The Qashqa’i people are happy and energetic people who try to spend most of their days in celebration. Wedding is one of their most important ceremonies, and being single is considered a sin. Love is something that is considered less among them and it usually develops over time between husband and wife over the course of a lifetime.

Usually the mother or sister of the boy chooses the girl. After the boy’s initial agreement, they negotiate with the girl’s family, and the girl is eventually informed. Next, the elders of the tribe, who accept all their words, go to the girl’s family and explain the financial, social status and temperament of the boy’s family. Upon receiving a positive response from the girl’s family, a precious piece of gold or clothing is presented to the bride’s mother and sisters. 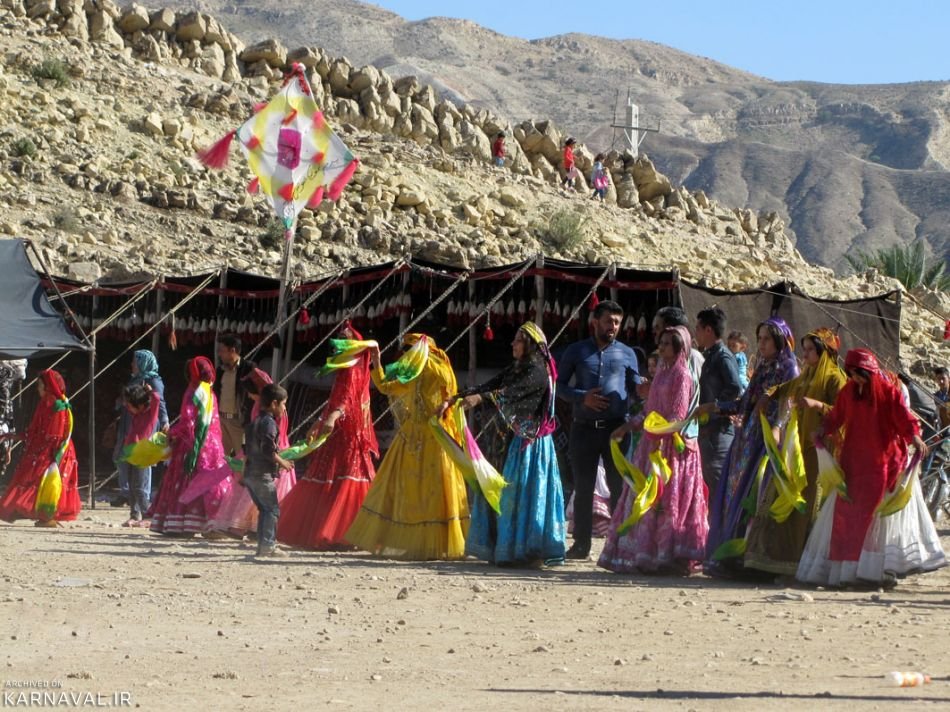 The Nikah ceremony or signing marriage documents takes place at the bride’s home. Guests usually bring rice, meat and cash with them and contribute to the wedding expenses. The wedding takes several days and comes with a variety of events.

The two families choose a local venue for the celebration. It is usually held in the meadows and plains to make singing and group dance easier along with a variety of local games. They work together to wipe the wedding ground off the rocks and bushes, make tents for the guests, and decorate the tent floors with rugs, mats and wool. The bridal chamber is built at a high altitude. This tent is decorated with ornaments and covered with colourful Kilims. Flags or handkerchiefs are also hung over the tent. A tent is also set up for cooking and they put the necessary things in it. 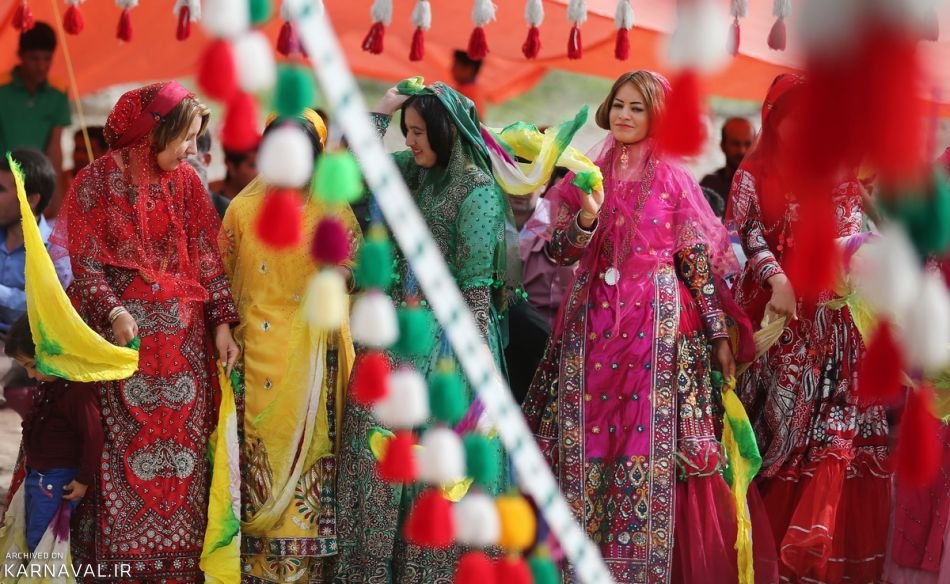 The henna ceremony will be held on the day before the wedding and up to a few days after the wedding. They put henna on the bride’s hands and feet, make up her eyes and comb her hair. When the bride is ready, they put a large silk scarf over her head and face. This scarf stays on the bride’s head until the marriage night and it is removed with special rituals. Usually the girl is housed in a tent the day before the wedding and the groom is not allowed to see her. 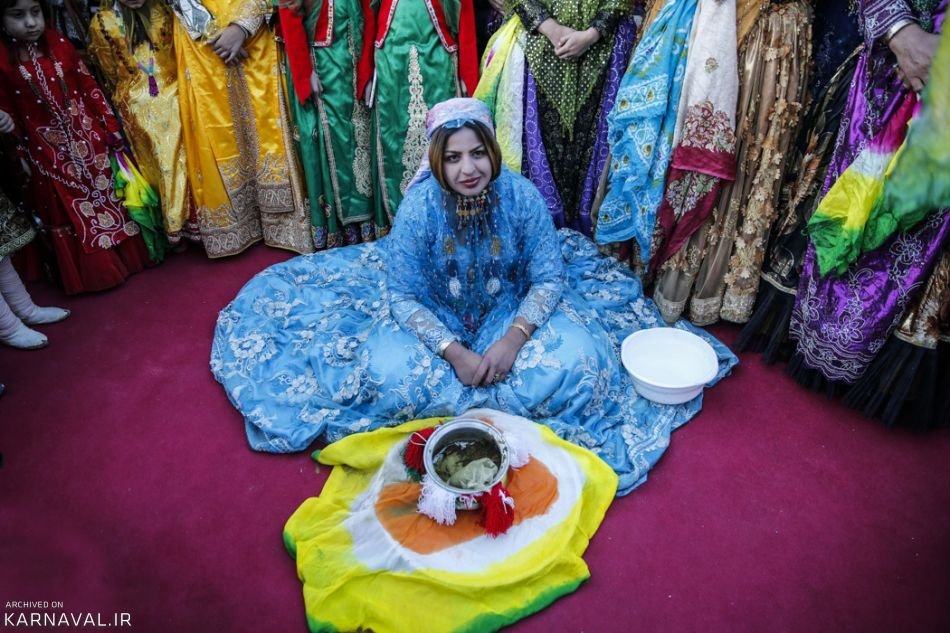 This is one of the most important parts of Qashqa’i wedding. Guests walk to the bride’s tent with musicians. The bride has a white cloak and rides on a horse. Her dowry is also on camels and mules and they are brought to the groom’s tent. The Qashqa’is leave a little boy behind bride to make sure that the first child of the bride and groom is a boy. After the convoy arrives at the groom’s tent, he helps the bride get off the horse and the groom’s mother shoves coins over them. At this time dance begins. One of the most spectacular customs of the Qashqa’i wedding is their dance of napkins. Each of the men and women holds two handkerchiefs while turning around a large circle. They dance with napkins in the air with musical instruments being played. 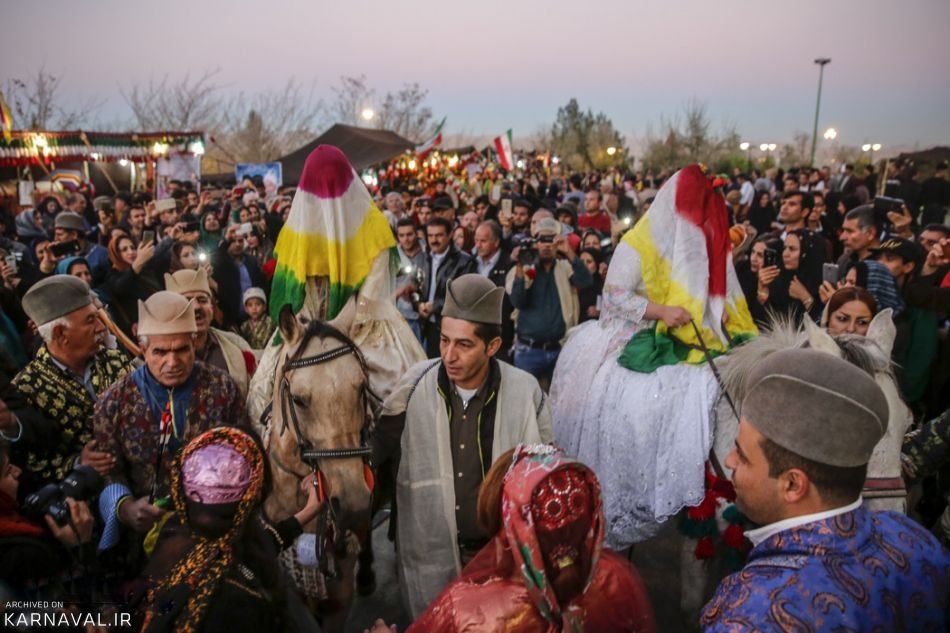 In general, the Sufra is very important to the Qashqa’is and they do their best for a wedding Sufra. Putting your feet on the Sufra is a great sin so when setting, no one puts feet on it. They all work together for wedding lunch and dinner. The wedding meal is meat and pilaf; it consists of a large tray of rice with cooked meat on it. They put traditional bread on the side of the trays, and yogurt drink, yogurt and water are put on Sufra. After lunch, tea and shisha are served.