TEHRAN(Basirat): A group of students of Iranian seminaries announced their readiness to look after the Western elderly suffering from coronavirus, protesting that the right to live is being denied by the Western capitalists. 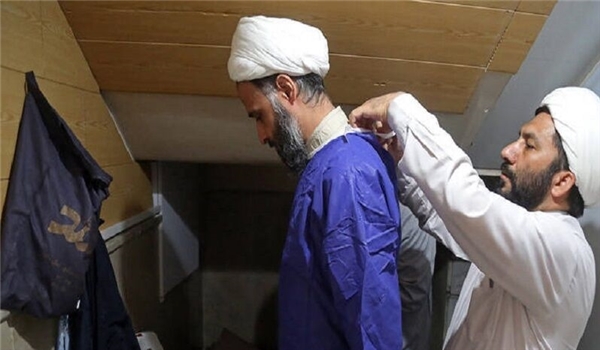 "This is not a propaganda show-off, but we have learnt from Imam Khomeini to sympathize for others", the group added, noting that what the Western capitalist system is doing is a massacre and an age discrimination to let the 65 or 70 years old people die.

The group made it clear that even if the mechanism for this is not provided, at least this message can be conveyed to the world.

This proposal was announced after a piece of shocking news was released on Tuesday which said that Spanish soldiers helping fight the coronavirus pandemic found elderly patients in retirement homes abandoned and, in some cases, dead in their beds.

Spanish prosecutors said an investigation had been launched.

The military has been brought in to help disinfect care homes in Spain, one of Europe's worst hit countries.

Meanwhile, an ice rink in Madrid is to be used as a temporary mortuary for Covid-19 victims, officials said.

The virus is spreading very fast in Spain - the second worst-hit European country after Italy.

Earlier, a group of young students of Iranian seminaries in a letter to Foreign Minister Mohammad Javad Zarif voiced their preparedness to take care of elderly coronavirus patients in the US and Europe who have been abandoned by the medical authorities.

“Given the fact that the old and poor people who are infected with coronavirus in the US and certain European states are not being taken care of properly, the humanitarian responsibility requires us to help these patients and do not spare any efforts to save the lives of the creatures of the kind Creator,” the letter read.

It called on Zarif to pave the ground for sending the volunteer seminaries from Iran to help the elderly patients in the US and Europe or transfer these patients to Iran for treatment.

The coronavirus COVID-19 is affecting over 197 countries and territories around the world. The virus was first reported in the central Chinese city of Wuhan late last year. It has so far killed more than 27,700 people and infected over 607,000 others globally.

Iran reported on Friday that a total number of 2,378 coronavirus patients have died and 32,332 cases of infection have been identified in the country so far. Meanwhile, 11,133 people have also recovered.