TEHRAN(Basirat): The first mobile coronavirus testing laboratory was unveiled in Iran on Saturday morning as the nation continues to mobilize all its capacities to fight off the novel coronavirus, COVID-19, and the US sanctions have forced the nation to indigenize many health and treatment systems and devices. 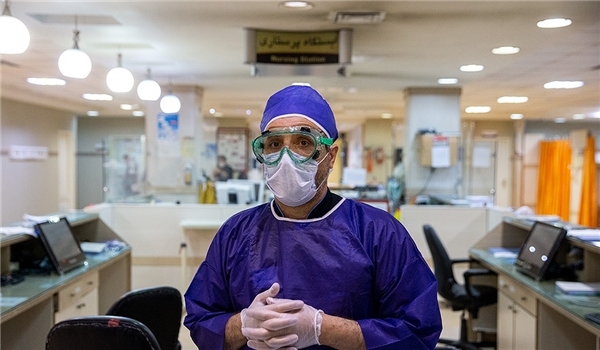 The first mobile diagnosing laboratory was unveiled with the Head of Basij Popular Mobilization Organization Brigadier General Gholamreza Soleimani in attendance. The lab is also capable of diagnosing other viruses as well.

Basij Organization has also produced over 40 million face-masks amid the national campaign against coronavirus epidemic.

Elsewhere, the project of plasma-treatment for corona-infected patients was carried out in the Western city of Kermanshah and the treated patient is in good health.

Commander of the Islamic Revolution Guards Corps (IRGC) Major General Hossein Salami said that Basij forces produce 3 million face-masks every day, stressing that the whole capacity of IRGC and Basij have been brought to the scene of campaign against coronavirus epidemic so that even a single patient is not left on his own.

An official of Iran's Health Ministry said that the ministry is conducting over 10,000 coronavirus tests at 90 laboratories across the country each day.

Also, a group of engineering medicine in Mashhad made isolation shields for carrying of patients suffering from infectious diseases such as corona-infected patients. The entire apparatus has been produced according to the standards used in the Chinese and American samples. However, with respect to the ample restrictions on electrical and mechanical parts in Iran, the shield has cost 1/10 of the foreign ones.

As another spectacular progress, a Pardis Technological Park company also managed to make a special disinfecting gate to protect medical personnel against coronavirus.

Executive Manager of the knowledge-based company Afashin Nasseri informed of manufacturing a device for disinfecting the apparel of medical personnel, especially those working at administrative section and those who are engaged in non-contaminated sections but have to commute to hospitalization sections.

The device is usable for entrance and exit gates of administrative buildings of companies and organizations and disinfecting employees and people coming from outside.

"This device sprays special disinfectants in haze form without wetting the clothes, Nasseri said, adding, "Those who cross the gate can disinfect themselves by a 5-second stop."

He continued that in fact this device is installed at the entrance and exit gates of hospitalization sections of corona-infected patients, to disinfect treatment staff's clothes and those who commute to the sections.

Nasseri added that it took two weeks to design and make this device.

Iran's Health Ministry Spokesman Kianoush Jahanpour announced on Saturday that more than 57 million Iranians have been screened for COVID-19 epidemic.

The coronavirus COVID-19 has affected nearly all countries and territories around the world. The virus was first reported in the central Chinese city of Wuhan late last year. It has so far killed more than 28,200 people and infected over 613,000 others globally.

Iran reported on Friday that a total number of 2,517 coronavirus patients have died and 35,408 cases of infection have been identified in the country so far. Meanwhile, 11,679 people have also recovered.