TEHRAN (Basirat) :Senior member of Tehran City Council Mahmoud Mirlohi expressed pleasure that despite the coronavirus epidemic in Iran and cruel sanctions imposed by Washington against the country, stores and shopping centers are full of goods. 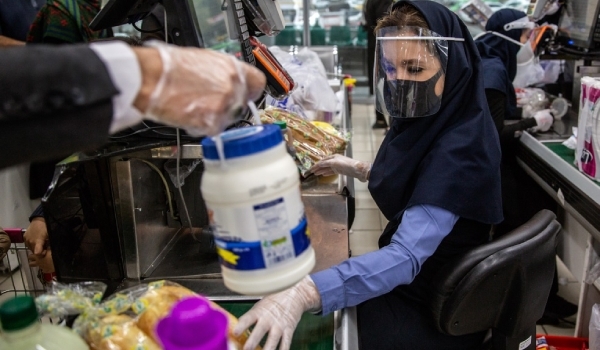 “Today, when we look at the city’s stores, we see that despite sanctions against Iran, foodstuff and other needed goods are in abundance in shops,” Mirlohi said, addressing a meeting of the Council in Tehran on Sunday.
He also praised the very fact that Iranian cities never saw panic-buying by people for the fear of coronavirus, which he said shows the country’s rich culture.
Mirlohi, meantime, called on the international bodies to pressure the US to lift the cruel sanctions against Iran given the coronavirus pandemic in the world.
The coronavirus outbreak has prompted people around the world to panic buy toilet paper and other supplies, but in Iran citizens calmly get their supplies from markets, groceries and chain stores with full shelves.
Last month, British Ambassador to Iran Rob Macaire released an image on his twitter page of shelves of a shop in Tehran full of toilet papers in a bid to advise his compatriots to learn from Iranians and stop panic buying for the fear of the coronavirus epidemic.
Many European officials have urged their citizens to stop panic buying and stockpiling as shelves continue to be empty amid the coronavirus outbreak.
Britain’s Secretary of State for Environment, Food, and Rural Affairs George Eustice asked people to be responsible when they shop and think of others.
The Iranian health ministry announced on Sunday that 2,483 new coronavirus patients have been identified in the country, raising the total number of infected people to 58,226 and deaths to 3,603.
“2,483 new patients infected with COVID-19 virus have been identified in the country since yesterday based on confirmed diagnosis criteria,” Health Ministry Spokesman Kianoush Jahanpour said.
He added that the number of coronavirus patients in Iran has increased to 58,226, adding that 3,603 people have lost their lives due to infection to the virus, 151 of them in the past 24 hours.
Jahanpour, meantime, said that the recovery of patients has accelerated in Iran and 22,011 infected people have been treated and dismissed from hospital.
He noted that 189,790 coronavirus diagnosis tests have been carried out in the country so far, adding that 70mln people in Iran have also been screened.
The coronavirus COVID-19 is affecting approximately all countries and territories around the world. The virus was first reported in the central Chinese city of Wuhan late last year. It has so far killed more than 65,600 people and infected over 1.21 million others globally.
The Iranian foreign ministry declared that despite Washington’s claims of cooperation to transfer drugs to Iran via the new Swiss-launched payment mechanism, the US is troubling the process amid the coronavirus outbreak in the country.
Although US claims that medicines and medical equipment are not under sanctions, they have practically blocked the transfer of Iran’s financial resources in other countries into the Swiss Humanitarian Trade Arrangement (SHTA), Iranian Foreign Ministry Spokesman Seyed Abbas Mousavi said.
As the death toll from the virus surges, Iran intensifies its preventive safety measures. Closures of schools and most universities have been extended until late April.
The government also imposed travel restrictions, specially on Iran’s North, which is among the red zones. The country has also adopted strict digital health control procedures at airports to spot possible infections.
Health Minister Saeed Namaki announced last month that a new national mobilization plan would be implemented across the country to fight against the coronavirus epidemic and more effectively treat patients.
Namaki said that the plan will include all the 17,000 health centers and the 9,000 medical and clinical centers in all cities, suburban areas and villages.
He added that the plan will include home quarantine, noting that infected people will receive the necessary medicines and advice, but they are asked to stay at home.
Namaki said that people with a more serious condition will stay at the hospitals, adding that the public places will be disinfected, the entries of infected towns and cities will be controlled to diagnose and quarantine the infected cases.
He added that the necessary equipment and facilities have been provided, expressing the hope that the epidemic would be curbed.
According to the latest statistics of Health Ministry, the number of medical laboratories to test coronavirus infection has reached over 90 across the country.
The World Health Organization (WHO) says Iran's response to the virus has so far been up to the mark. Still, it says the US sanctions are a big challenge, and Washington would be complicit in the rising death toll in Iran if it would not remove its sanctions.
The World Health Organization has considered priorities in combating coronavirus and Islamic Republic of Iran obeys and follows up priorities as defined by WHO.The WHO is dispatching separate delegations to all countries.
Source:FNA
97-Year-Old Woman Overcomes Coronavirus
Iranians start performing 'Equality, Sincere Assistance Maneuver'
Nearly 42,000 Coronavirus Cases Recover in Iran
Burial of Iranians Who Died of COVID-19 /Photo
President Unveils Smart Social Distancing Plan in Iran
G77, China Demand End to Sanctions against Iran amid Virus Pandemic
Nature Day manifests national empathy against coronavirus
Tags: basirat ، corona virus ، World Health Organization ، sanction ، Rob Macaire ، Kianoush Jahanpour ، Saeed Namaki
Error Report
0