TEHRAN (Basirat) : A huge statue of Martyr Qassem Soleimani will be set up at the main entrance of the town of Takestan in Qazvin Province. 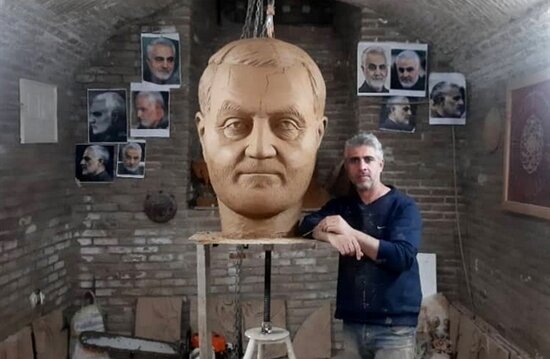 The clay statue, which is 6 meters tall, has been made by Mohammad-Ali Jamali during a period of over two months, the Persian service of CHTN reported on Saturday.
“I created the sculpture to express my love for Soleimani, the commander of the hearts,” Jamali said.
“The statue represents the image of a defender with a calm face, holding a flower in his hand instead of a weapon,” he added.
“I wish I could make a model of the statue to be set up in Syria, which owes Martyr Soleimani its liberty and security,” he noted.
Several of Jamali’s statues, including “Book Wall”, “Silk Road Caravan” and “A Beautiful Thought”, have previously been set up in Qazvin.
Lieutenant General Soleimani, who was the commander of Iran’s Quds Force, was assassinated in a U.S. airstrike in Baghdad on January 3.
Photo: Sculptor Mohammad-Ali Jamali poses beside the head of Martyr Qassem Soleimani’s statue at his atelier in Qazvin in an undated photo.