US Military Morale in Decline

TEHRAN(Basirat): US Navy Vice Adm. Bill Merz, the commander of the United States' largest forward­-deployed fleet, recently visited the aircraft carrier reeling from a coronavirus outbreak and admitted the morale for some of its crew was negatively impacted by recent events. 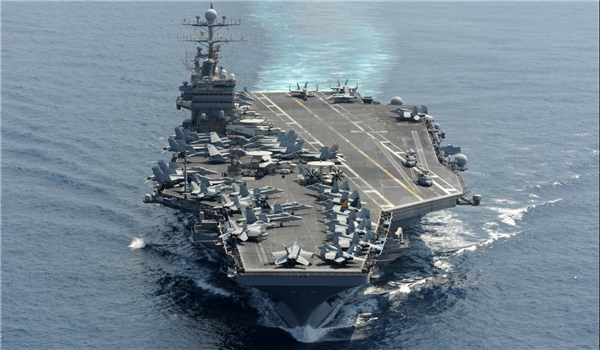 "There was lots of anxiety about the virus," Merz told reporters. "As you can imagine the morale covers the spectrum, considering what they have been through."

The nuclear-powered USS Theodore Roosevelt, which is currently stationed in Guam, is not the only one that’s been beset with a range of recent problems — including the firing of its commander, Capt. Brett Crozier. Other bases and warships are going through the same ordeal.

None of them has been spared by the COVID-19 storm, desperate to strike a balance between fighting COVID-19 and ensuring combat readiness.

The Military Times and other US media outlets recently reported that with the rapid increase in COVID-19 cases in the US Army, the top military officials are having a tough time deciding between ensuring combat readiness and maintaining the health of soldiers.

One is the failure in early warning and prevention of the COVID-19 outbreak in the US military. The armies of all countries have the most advanced intelligence systems and can obtain the highest level of confidential information related to various security threats from their respective national departments. Therefore, the military should have the ability to achieve foresight, early prevention and curb the spread of the disease in military.

At the same time, as an organization with strict discipline, the military can more effectively adopt various prevention and control measures internally. Of course, the premise is that the military wants to do this, rather than dismiss the officers and soldiers who actively call for epidemic prevention measures. That’s precisely what the US navy did.

The US military failed to do this. The confirmed cases first appeared in overseas garrisons, then the Pentagon and the domestic garrison were infected, and then the major military exercises, such as Defender Europe 2020, were canceled.

The most important event in the world and in the United States is the dismissal of Captain Brett Crozier of the USS Theodore Roosevelt CVN-71. Under the premise of Hollywood blockbuster efforts to promote American heroism around the world, the dismissal of Crozier is clearly incompatible with the American values promoted by Hollywood blockbusters.

The other is that the US army is not playing a critical role in the national fight against COVID-19. The armies of many countries are actively braving the global COVID-19 storm. Admitting and treating patients, developing vaccines and delivering necessities for the people. The US military is yet to be truly active in all aspects of fighting the epidemic.

The Iranian armed forces are not only playing an active part in fighting the epidemic in the country, but also became the main body providing assistance to the government to set up many field hospitals.

However, the performance of the US military is quite disappointing. Not to mention the late start of involvement in the national fight against COVID-19. Of course, the "confident" President Donald Trump's national epidemic prevention measures also lag behind.

The performance of USNS Comfort hospital ship is sufficient to reflect the failure of the US army in the fight against the epidemic. After arriving in New York on March 30, the ship at first only admitted diseases except COVID-19 in order to alleviate overcrowding in New York hospitals.

Then, in the next five days, the ship with thousands of hospital beds only received 20 patients. On April 7, a crew member of the ship was confirmed with COVID-19. On the same day, the ship announced that it had begun receiving COVID-19 patients.

Contradictory information about whether the ship has the capacity to treat COVID-19 patients, coupled with that a specialized hospital ship could not guarantee the security of its own crew, the real role of US military in the national fight against COVID-19 can be imagined.

In sum, the US military failed to respond to the COVID-19 epidemic effectively, and this failure will affect its ability to respond to traditional security threats.