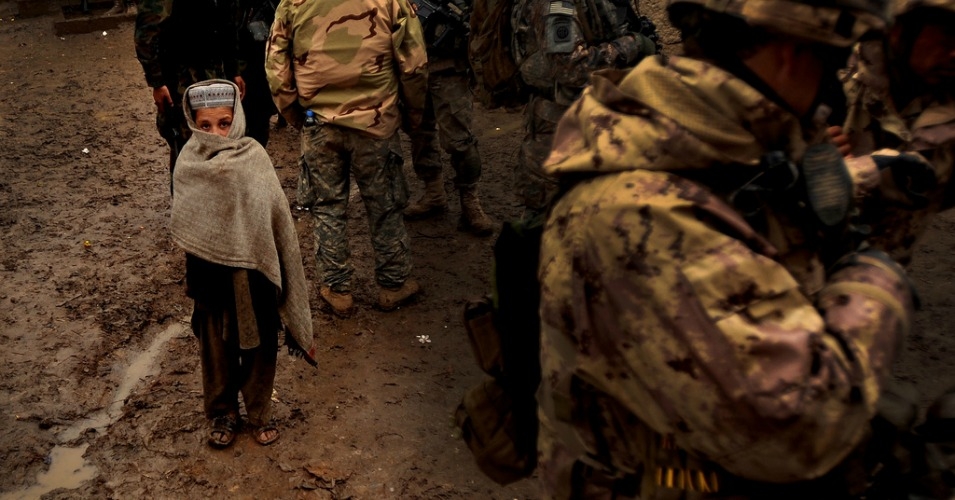 Climate-related disasters heighten the risk of conflict around the world, according to new research.

Armed violence is likely to rise amid drought, heatwaves, and other crises, particularly in countries that are already fractured along ethnic lines, finds a new report from Germany's Potsdam Institute, published Monday in the Proceedings of the National Academy of Sciences.

Analyzing data on armed conflict from 1980-2010, the researchers found a global coincidence rate of nine percent "regarding armed-conflict outbreak and disaster occurrence such as heat waves or droughts," but when looking only at "ethnically highly fractionalized countries," the coincidence rate shot to nearly 23 percent.

Although we do not report evidence that climate-related disasters act as direct triggers of armed conflicts, the disruptive nature of these events seems to play out in ethnically fractionalized societies in a particularly tragic way. This observation has important implications for future security policies as several of the world’s most conflict-prone regions, including North and Central Africa as well as Central Asia, are both exceptionally vulnerable to anthropogenic climate change and characterized by deep ethnic divides.

"It's significant that you can make that statement—that nearly 25 percent of those conflicts coincided with some type of climate-related disaster," lead author Jonathan Donges told Climate Central.

"What's much more important is that this number is highly statistically significant and robust," he said. "You cannot explain it by chance."

The findings are particularly important for countries on the frontlines of both conflict and climate change, such as Syria or Afghanistan, where shortages of food and water and armed violence occur consistently, the researchers say.

The exodus of victims from Syria and other war-torn countries has also been fueling waves of nationalism among Britons, Americans, and other Westerners. Fear of refugees underpinned a campaign that helped convince residents of Britain to vote recently to withdraw from the European Union, fracturing continental unity.

"Conflicts hamper development, and cause widespread fear and terror," said Jonas Nordkvelle, a researcher at the Peace Research Institute Oslo. The institute manages an armed conflict database that the climate researchers used to produce Monday’s paper. "If we know which factors contribute, maybe we can prevent conflicts from erupting—or limit their scope."

Potsdam's report is the latest research to bolster the argument that climate change fuels conflict worldwide.

A 2015 study by Columbia University's Lamont-Doherty Earth Observatory found that "a record drought that ravaged Syria in 2006-2010 was likely stoked by ongoing man-made climate change, and that the drought may have helped propel the 2011 Syrian uprising."

And Common Dreams reported on a World Bank study in May which found that "[g]lobal water shortages, exacerbated by human-caused climate change, are likely to spur conflict and migration across the Middle East, central Asia, and Africa—all while negatively impacting regional economies."

The warnings have also come from the National Bureau of Economic Research, and even the U.S. Department of Defense, which ranked global warming as a destabilizing force in 2011 for the first time.

"The amount of oil burned—and the burden of smoke released—increases whenever the Pentagon goes to war," he wrote.