Amid Uptick in Bombings and Civilian Deaths, US Sells More Arms to Saudis 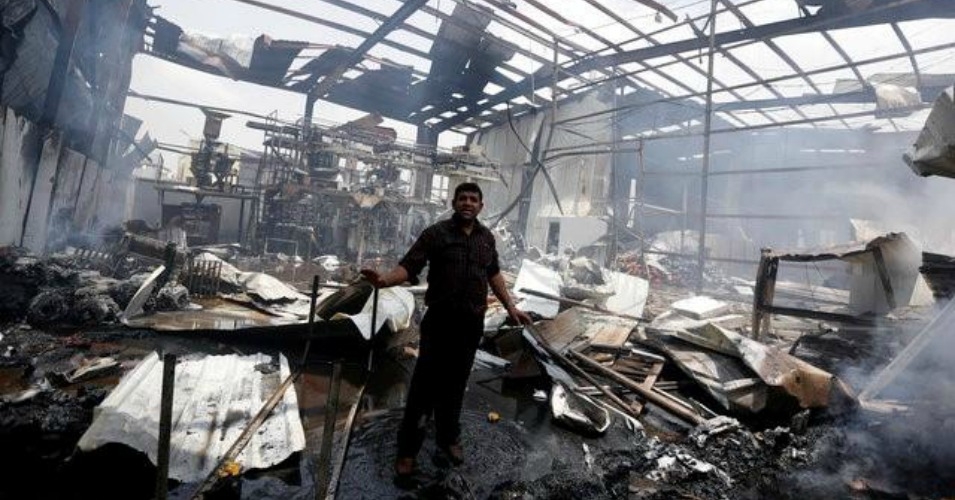 The Saudi-led, U.S.-backed military coalition has resumed bombing in Yemen as an uneasy, five-month-long ceasefire gives way to an escalation in fighting that puts besieged civilians at even greater risk.

According to news outlets, there were "immediate reports of civilian deaths" after coalition airstrikes in the Yemeni capital of Sana'a on Tuesday.

Citing medics at the scene, Reuters reports that the death toll hit 13 and that "[m]ost of the casualties were women working at the al-Aqel potato chip factory in the Nahda district of the capital."

The factory targeted was situated inside an army maintenance camp. Firefighters scrambled to control the resulting blaze but were unable to rescue people inside the building. More than half of those killed are believed to be women. Abdullah al-Aqel, the factory director, said the death toll stood at 16, with more than 10 people injured.

And after peace talks unraveled on Saturday, coalition warplanes bombed Al Madeed marketplace in the district of Nehm, about 35 miles northeast of Sana'a, on Sunday. The New York Times reported that 18 Yemeni civilians were killed in that attack.

"They targeted only civilians," pharmacist and eyewitness Sadam al-Othari told the Times. "There wasn't a single gunman or military vehicle around."

According to figures released this week by the Norwegian Refugee Council (NRC), at least 6,500 people have been killed—more than half of them civilians—and 32,000 injured in the 500 days since the coalition began its bombing campaign.

The NRC said that while peace talks in Kuwait have collapsed, Yemeni civilians are being plunged ever deeper into a desperate humanitarian situation.

The Oslo-based organisation said that almost 20 million Yemenis have no access to clean water, and more than 14 million do not have access to healthcare.

More than seven million people are classified as "severely food insecure," while a Saudi-imposed blockade has "crippled" Yemen’s economy, according to the NRC.

What's more, Saudi Arabia and its military coalition have been the target of criticism from both the United Nations and Human Rights Watch for alleged breaches of international humanitarian law that many say amount to war crimes.

Amid all this, "a lot of nations would be looking to distance themselves from the disastrous failure," wrote Jason Ditz of Antiwar.com on Monday. "Not the U.S., however, as they brag up their escalating support for the Saudi air war."

The newest data, released by Central Command, reveals that U.S. refueling operations in Yemen are up some 60% over the past six months, a span of time which included a long ceasefire and failed peace talks. The Saudis never stopped bombing though, and the US never stopped facilitating.

U.S.-sold bombs dropped by US-sold planes refueled by the US Air Force have been at the center of some of the most glaring war crimes in Yemen so far, and while the Obama Administration is claimed at times to be pushing the Saudis to reach some sort of settlement, there’s no sign that’s actually happening.

In addition, the Pentagon said Tuesday the U.S. State Department has approved a sale of nearly $1.5 billion in additional munitions, including 130 Abrams battle tanks and 20 armored recovery vehicles as well as other equipment.

The U.S. Defense Security Cooperation Agency, which oversees foreign arms sales, said that General Dynamics will be the principal contractor for the sale, adding it would contribute to U.S. national security by improving the security of a regional partner.

[...] Lawmakers have 30 days to block the sale, though such a move is highly unlikely.

Earlier this year, Human Rights Watch called for Western countries to impose an arms embargo on the Saudi government over its conduct in the war.

"Saudi Arabia has been engaged in a war inside Yemen for over a year, and we're selling them weapons with knowledge they will be used in Yemen, where ample evidence has shown they are using them to commit war crimes," Raed Jarrar, government relations manager with the American Friends Service Committee, told The Intercept at the time.

"We're only asking for implementation of existing laws and we're not picking on Saudi Arabia or anyone else because of a partisan agenda," he said, "but the U.S. should stop facilitating death and destruction in the Middle East through arms sales to regimes it knows are committing war crimes."