Mixed Messages From Merkel, Hollande, Renzi Over Future of EU

TEHRAN (Basirat)- The leaders of Germany, France and Italy were sending out mixed messages when they gathered on board the Italian aircraft carrier "Garibaldi" Monday (August 22) night, with Merkel softening her approach to fiscal EU discipline, calling for a "better Europe," while Renzi called for more integration. 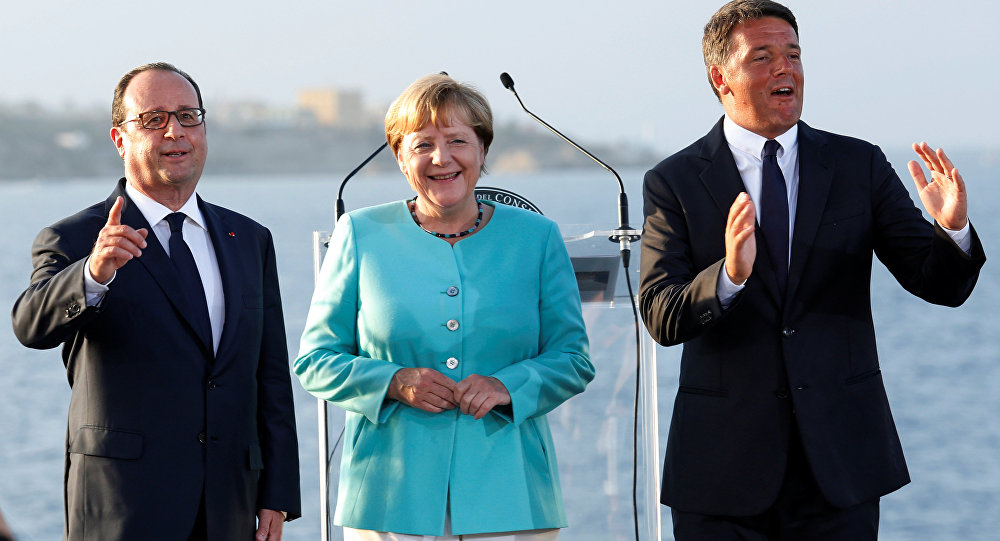 The leaders of Germany, France and Italy were sending out mixed messages when they gathered on board the Italian aircraft carrier "Garibaldi" Monday (August 22) night, with Merkel softening her approach to fiscal EU discipline, calling for a "better Europe," while Renzi called for more integration.

German Chancellor Angela Merkel, French President Francois Hollande and Italian Prime Minister Matteo Renzi held a news conference on board the aircraft carrier, anchored off the island of Ventotene — was where the imprisoned politicians Altiero Spinelli and Ernesto Rossi wrote the Ventotene Manifesto in June 1941, calling for the creation of a federal Europe, preventing another world war.

Renzi has been pressing for a greater relaxation of tight EU fiscal rules — particularly over deficit targets within the Eurozone —  as he struggles to kick-start the Italian economy. Spain and Portugal escaped fines for breaching deficit targets — the so-called "Stability Pact" — because the European Commission thought it would enflame anti-EU sentiment.

​Merkel, on the other hand, has been tough on countries like Greece, which is being required to follow a very tough austerity course, raise taxes and massively change its state pension provisions in return for its third bailout.

However, Merkel told reporters on the Garibalidi:

"I think the Stability Pact has quite a lot of flexibility that we can use in a clever way. That is the responsibility of the (European) Commission — it's not one (EU) member state that decides vis-a-vis another."

Meanwhile, there are divisions within the EU over whether — in the wake of Brexit and rising nationalism throughout member states — there should be greater integration or a less centralized EU. The Visegrad countries — the Czech Republic, Hungary, Poland and Slovakia — have vowed to draw up their own plans for a less centralized EU, following Brexit.

In a statement ahead of a crucial EU summit in Slovakia — which holds the rotating presidency until December —  the group said:

"We consider the meeting of Heads of State and Government in September in Bratislava as an excellent opportunity to start the necessary political reflection on the EU and its future. It should take into account the need for the EU to increase democratic legitimacy and more effectively address citizen's needs and concerns in order to regain their trust in the common European project."

"We need to invest in a common defence policy, in digital innovation, in schools and culture. Europe is the affectionate mother of our values, it is not the icy guardian of bureaucratic rules that are difficult to accept."

Merkel, however, wants to form "a better Europe" rather than forge ahead with "more Europe."

Hollande — whose country has been the target of a series of terrorist attacks — many with links to Daesh — called for more integration on defense and security. "To have security we need frontiers that are controlled so that is why we are working to reinforce coastguards and border guards," he said. "We want more coordination in the fight against terrorism," he said.