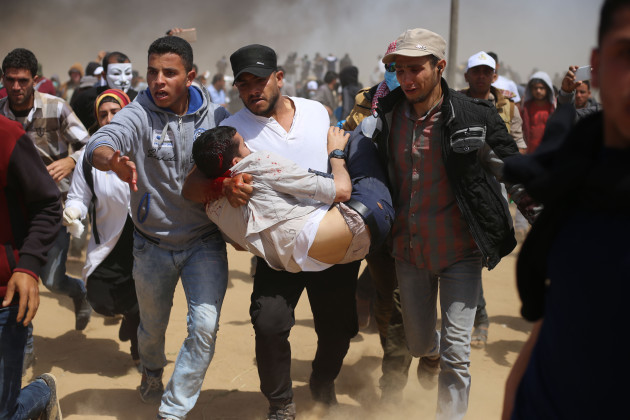 Mourners, including Hamas leaders, chanted slogans condemning the occupying regime of Israel for shooting civilians and called on the international community to deliver justice.
The Zionist military said five Palestinians had been killed during the protests Friday after they allegedly broke through the heavily-guarded fence and attacked an army post.
Military spokesman Jonathan Conricus said around 20 Palestinians had crossed the fence in an "organized attack" after an explosive device destroyed a portion of the fence.
About five of those who got through the fence assaulted a Zionist military position and were "repelled," he wrote on Twitter.
The enclave's health ministry said seven Palestinians were martyred by Israeli fire as thousands of protesters approached the heavily-guarded fence.
On Saturday, the ministry named the victims as: Ahmed al-Taweel, 27, Muhammad Ismail, 29, Ahmad Abu Naim, 17, Abdullah Daghma, 25, Afifi Atta Afifi, 18, Tamer Abu Armaneh, 25 and Muhammad Abbas, 21.
The military said approximately 14,000 "rioters and demonstrators" took part in Friday's protests.
At least 205 Palestinians have been martyred by Israeli fire in Gaza since protests began on March 30.
The majority were killed during demonstrations near the fence, though others have died in airstrikes and tank shelling. One Zionist soldier has been killed.
The protesters are demanding to be allowed to return to land now inside Occupied Palestine from which their families fled or were displaced during the 1948 war surrounding the creation of the Zionist regime.
They are also calling for the occupying regime of Israel to end its crippling blockade of the strip.
There had been hopes among the Zionists that the protests would ease after a UN-brokered agreement to ease the strip's energy crisis took effect this week. But thousands gathered once again on Friday at sites along the fence.
Hamas leader Ismail Haniyeh also attended the protests east of Gaza City and hailed the ongoing demonstrations.
Addressing the funeral on Saturday, Haniyeh said Palestinians will not stop the "Great March of Return” protests until a decade-long Zionist blockade on Gaza is lifted completely.
Thousands attended another funeral for Aisha Muhammad Rabi, the Palestinian woman who was martyred late Friday night when Zionist settlers threw stones at her car near a West Bank checkpoint south of Nablus.
Rabi, 47 and a mother of seven, was buried in Biddya, where she lived in the West Bank. A general strike was declared Saturday in the town in response to her death and all local shops and business were closed.
Shafik Aw-Rabi, a relative, said: "This is the fate of the Palestinian people, who will pay with their blood and their land for their liberty. Umm Muhammad is another victim and another martyr on the long list, but we will not despair and we will not stop until we expel the last of the settlers from our land."
According to Palestinian reports, Rabi and her husband, Yacoub, were driving when a group of settlers threw stones at their car. She was reportedly struck in the head with a stone and died shortly after.
Issam, the husband's cousin, told Haaretz that the couple was heading home with two of their daughters after visiting a third daughter in Al-Khalil. Issam said the car was struck by stones thrown from a hill near the Tapuach checkpoint, with one of the stones striking her inside the vehicle. The family was taken to a local hospital, where she was pronounced dead.