Tehran (Basirat) :A senior commander of the Islamic Revolution Guards Corps says Ayatollah Seyyed Ali Khamenei had been worried about the lives of civilians when the IRGC sought to fire missiles at ISIS positions in Syria. 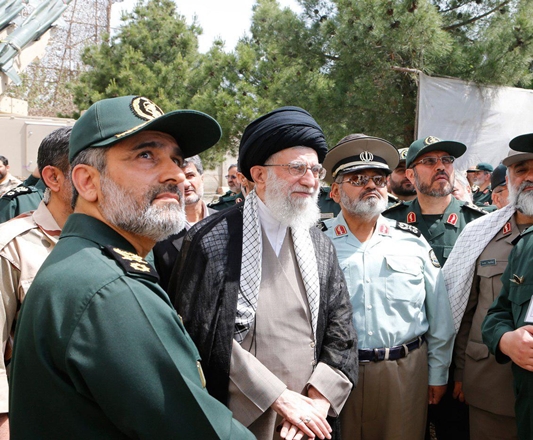 Speaking in a Tuesday ceremony in Tehran, IRGC Aerospace Commander Brigadier General Amir-Ali Hajizadeh quoted his Chief-Commander Major General Mohammad-Ali Jafari as saying, "The Leader of Islamic Revolution was worried about possible damages to the people of Syria’s Deir ez-Zor” when the IRGC was about to launch a retaliatory attack on ISIS positions.
However, Hajizadeh said, we gave him assurance that we would just hit the positions of ISIS terrorists, and we did it.
"The operation was carried out accurately, and based on the footage captured by our drones flying over the targets in Deir ez-Zor, we in Kermanshah simultaneously saw the missiles hitting the positions,” he noted, adding that the Iranian drones later landed safe and sound hundreds of kilometers away from Deir ez-Zor.
According to Hajizadeh, the Leader had repeatedly emphasized the accuracy of missiles is the top priority for him.
The IRGC worked hard to maximize the accuracy of its missiles, and now the country is the top missile power in the region, seventh or eighth in the world, and is even ahead of North Korea in this field, he added.
"In drone industry, we’re one of the world’s top 15 powers, even ahead of Russia and China. We also have good capabilities in air defense, and enjoy certain equipment that is more advanced than that of Russia, France, China, and the UK,” he noted.