TEHRAN (Basirat): Saudi dissident journalist Jamal Khashoggi, who was killed on October 2 in the Saudi consulate in Istanbul, might have lost his life for disclosing Riyadh’s funding of an anti-Iran UK-based TV channel, the British daily Guardian suggested. 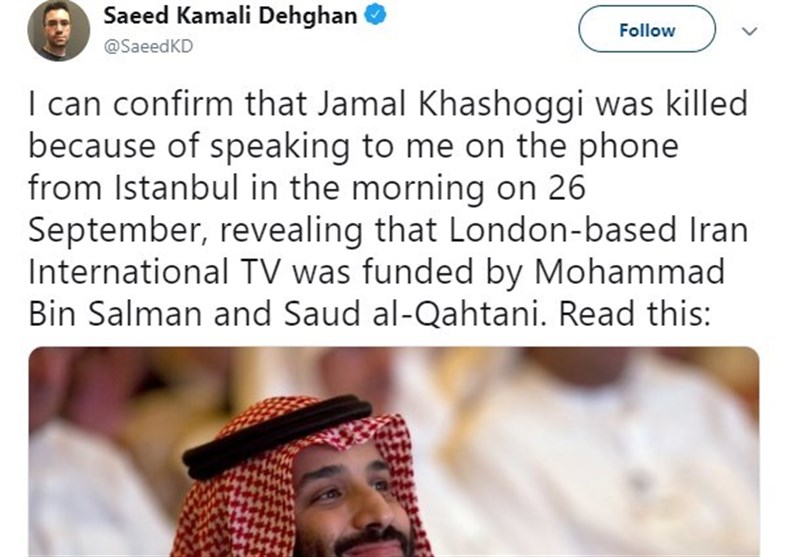 In a report on Oct. 2, the Guardian cited a source close to the Saudi government as saying that the anti-Iran London-based TV channel Iran International received an estimated $250m (£192m) from the Saudi royal court each year.

Now the Guardian correspondent, in a Friday tweet, has revealed that his source was Khashoggi, the Washington Post columnist who was assassinated on the same day as the report was published in a premeditated murder in Turkey blamed on Saudi Crown Prince Mohammed bin Salman also known as MBS, Press TV reported.

The Guardian later quoted the same source as saying that the Iran International was being funded through a secretive offshore entity and a company whose director was a Saudi Arabian businessman with close links to bin Salman.

The source told the Guardian that Saud al-Qahtani, who served as media adviser to MBS and was among several senior officials removed in connection with Khashoggi’s murder, was involved in the funding of Iran International.

"It is money coming from the royal court,” the source – now revealed to be Khashoggi – said, when speaking about the Saudi crown prince.

Earlier this summer, the station came under fire for praising a terrorist attack in Iran’s Ahvaz and broadcasting live coverage of a rally by the anti-Iran terrorist group Mujahedin Khalq Organization (MKO).

Khashoggi, an outspoken critic of bin Salman, entered the Saudi consulate in Istanbul on Oct. 2, but never came back.

The Saudi kingdom, after denying the murder for several days, finally admitted that Khashoggi had been murdered in the consulate during an interrogation by rogue operatives that had gone wrong after diplomatic pressure grew tremendously on Riyadh to give an account on the mysterious fate of its national.

However, Saudi Arabia said that it did not know the whereabouts of the body, which is widely believed to have been dismembered.

Turkish President Recep Tayyip Erdogan later announced the assassination had been ordered at the "highest levels" of the Saudi government.