TEHRAN(Basirat): Israeli officials have bandied about their cascading failure to escalate the security situation in Gaza strip, Lebanese paper 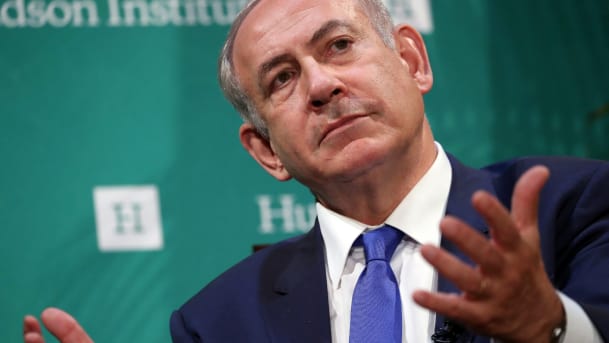 Security institutions in the Zionist entity were quick in apportioning blame and trading accusations among themselves and among politicians over their lack of vision and strategy on Gaza, Yahya Dbouk of Al-Akhbar daily said.

However, amid these serious accusations and the persisting street protests, its seems that Netanyahu’s efforts to crowd out attention from the "swamp” he’s been sinking into, are the most significant event in the wake of the Defense Minister Avigdor Lieberman’s resignation, the report elaborated.

Netanyahu’s efforts also come as the Israeli military institution faces widespread criticism over the ceasefire in Gaza. For its part, the military institution has also accused politicians of having a narrow political horizons and visions on several challenges threatening the Zionist entity, including Gaza which is considered less dangerous than other fronts

Speaking at a memorial for David Ben-Gurion in the Negev, Netanyahu claimed that Hamas "begged for a cease-fire, and they know very well why.” But his critics and the public opinion didn’t buy his pseudo-pretext. A recent opinion poll showed that only 14% respondents believe that the israeli army has attained victory in its last escalation.

Netanyahu’s opponents, however, continued to criticize the Israeli premier and accuse him of being intimidated by Hamas, Dbouk added, quoting high-level security sources.

The security institution criticized the government and its officials, with high-level security sources telling the Israeli Radio, that the government "does not have a prior vision or a proper perception of the political objectives regarding military operations in Gaza.”

The sources stressed that in the absence of visions and goals of politicians, "it is impossible to determine the objectives of any war.”

The same sources pointed out that the resignation of the Defense Minister Avigdor Lieberman "exposed the political institution’s deficiencies”, as the Israeli Security Cabinet, which is constantly manipulated by politicians, has no longer any importance.

Defending the Israeli army and justifying its reluctance to fight, the sources said that "everyone knows that Hamas is Israel’s weakest enemy, and that there are less costly solutions than a large-scale military operation.”

Reserve troops haven’t been called up during the last escalation, the sources pointed out, adding that "it’s impossible to recruit reserves… That has happened three times in the past five and a half years, and that’s totally wrong.”

"When reserves are called up, an immediate war will break out. It isnt a PlayStation game,” the sources said, according to Al-Akhbar report.

Meanwhile, Dbouk cited remarks of by Israeli ministers on the latest flare-up in Gaza, in a clear reference to the confusion the Zionist regime has been witnessing in the past few days.

The confrontation, demanded by some, could cause the firing of hundreds of rockets daily into Tel Aviv, paralyzing Ben Gurion airport for weeks, Hanegbi said.

"If we enter Gaza, at least 500 soldiers will be killed, and then their bodies will be returned to Israel,” he added.

For his part, Education Minister Naftali Bennett confirmed that he has requested to replace Lieberman instead of Netanyahu, Dbouk reported in Al-Akhbar.

Bennett said that "Israel’s deterrence is eroding,” claiming the only reason he applied for the post is for ‘Israel’ to "go back to winning” and that "for me, security is a calling, not just a job.”

On the other hand, Bennett did not spare Lieberman from criticism.

"The job of a defense minister is not to be led but to lead, not to complain about constraints but to come up with solutions,” said Bennett in an apparent reference to Lieberman, who had complained in his resignation speech that his role had been encroached upon.

Bennett said ‘Israel’ is currently in a dangerous, complex position. "The most dangerous thing for Israel that we began to think there is no solution to terror, to terrorists, to rockets, that you cannot win,” Bennet added.

He also warned that Hezbollah has turned from a small organization into a large army possessing 130 thousand rockets, while Hamas has become more rude, Al-Akhbar added.