TEHRAN (Basirat): American political leaders on Capitol Hill are at it again. They have blocked a vote to wind down US military support for the Saudi-led war on Yemen. 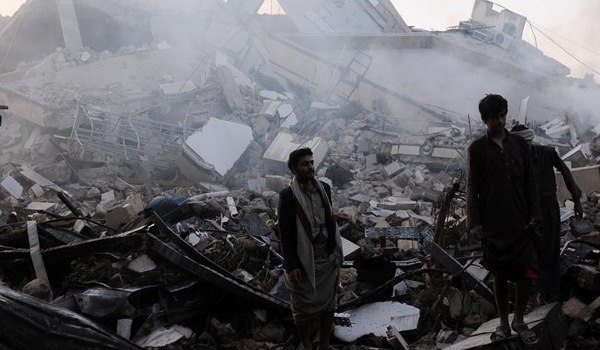 The measure narrowly passed with a 201-187 vote, making it more difficult for the House to take action on the war on Yemen with legislative action. What’s more, several of the co-sponsors of the Yemen resolution to end the war either voted to advance the bill or abstained from the vote entirely, meaning they played a part in preventing their own bill from reaching the House floor.

This comes at a time when Yemen’s popular forces of Ansarullah seek truce and are ready for ceasefire ahead of Sweden peace talks. Following the UN announcement of upcoming peace talks, the resistance movement has announced that they want a truce with the Saudi-led forces. Mohammed Ali al-Houthi, the group’s leader, says they decided to halt the strikes amid requests from the UN to support the peace effort. The Saudi-led invaders have also said they support talks, and ordered their own ceasefire.

But this was only in words. Saudi Arabia and its allies are now launching new offensives in the Northwest, which suggests their previously announced ceasefire was overstated. Saudi Arabia’s so-called ceasefire in the vital Yemeni aid port of Hodeida has also come to an end after a brief lull in fighting. Now, Saudi warplanes are again pounding the city, and Saudi-backed forces are again carrying out offensives in and around the suburbs.

This is unfortunate. The ceasefire didn’t last up to the peace talks, and the Saudis and their American-British weapons suppliers are not willing to end the unnecessary conflict – Ansarullah truce and ceasefire announcement notwithstanding. This is not a good sign for the upcoming peace talks, though they may also represent an attempt to secure some last-minute gains before coming to the negotiating table. Either way, renewed Saudi airstrikes in Hodeida is doubtless to mean another upswing in civilian casualties, further blockade of the vital port city, and worsened humanitarian crisis that has affected at least 12 million people.

Also don’t believe it when the US military claims it has discontinued refueling Saudi warplanes bombing Yemen. The Congress has just voted to continue the conflict while the US military continues to play a pivotal role in the war, providing arms and logistical support to UAE and Saudi forces occupying Yemen, blockading the country’s ports, and bombing its civilians.

Lest we forget, The UNHCR’s investigation has already concluded that there are "reasonable grounds” to conclude that the US-backed, Saudi blockade violates the proportionality rule of international humanitarian law. Under that convention, the blockade is illegitimate because its impact on civilians is disproportionate to its military benefits. The advocacy group Human Rights Watch has also called on the UN Security Council to impose travel bans and asset freezes on Saudi Arabia and its coalition leaders, including Saudi crown prince Mohammed bin Salman.

In the prevailing circumstances, it is silly for Saudi Arabia to claim that by blockading the port city they only aim to prevent the Houthi Ansarullah forces from receiving arms shipments from Iran. There is no way Iran could possibly send weapons and missiles into the country as it is completely under siege from air, land and sea. Besides, the resistance forces have the knowledge and the technology to make their own missiles that can easily target at the Saudi capital Riyadh.

In any event, the Saudis can only continue the illegal war and blockade with the much-needed military and diplomatic support they get from the United States. The good news is that several European countries like Germany have decided to suspend arms exports to Saudi Arabia and its fighting partner the United Arab Emirates. Norway has also ceased such sales to the UAE. However, the US and UK still support the Saudi-led coalition with weapons sales and logistical help. As long as such complicity in Saudi war crimes is there, the Ansarullah offer of truce and ceasefire will get nowhere. In consequence, the humanitarian crisis affecting millions of people will only continue to grow as the conflict rages on, and those in need will be prevented from receiving lifesaving assistance.

As is often the case, there is no military solution to the unnecessary conflict. The United Nations should call on Saudi Arabia and its partners to immediately end arms supplies, stop the airstrikes, and allow room for the new UN-led peace process in Sweden to take place in order to avoid further humanitarian catastrophe. After all, the protection of civilians and civilian infrastructure in Yemen is an essential provision of international law. When these laws fail, civilians suffer.