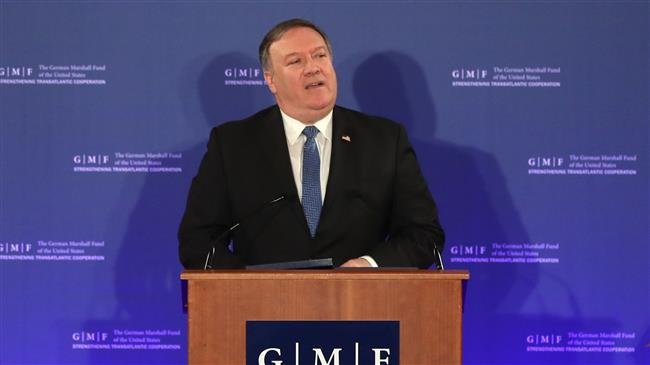 Pompeo said on Tuesday during a visit to Brussels ahead of a NATO foreign ministers meeting that President Donald Trump aimed to take the helm of a new world order, but certain "bad actors" were opposing him.

"President Trump … is returning the United States to its traditional central leadership role in the world," he said.

Pompeo urged US allies to help Trump to succeed.

"We are rallying the noble nations of the world to build a new liberal order" led by Trump, Pompeo said ahead of the meeting with NATO foreign ministers.

Pompeo claimed Russia, China and Iran had undermined the global leadership of the United States.

He said the Trump administration would no longer tolerate opposing influences willing to stop it from reaching its objectives.

Pompeo hinted that international organizations had to either work in line with US foreign policy, or face change.

Organizations such as the United Nations, European Union, African Union, the International Monetary Fund and World Bank have become corroded are in dire need of change, he suggested.

"The first two years of the Trump administration demonstrate that President Trump is not undermining these institutions nor is he abandoning American leadership. Quite the opposite," Pompeo said, adding, "Bad actors have exploited our lack of leadership for their own gain."
Pompeo told the gathering that it was to duty of every nation to "honestly acknowledge its responsibility to its citizens and ask if the current order serves the interests of its people as well as it could -- and if not, we must ask how we can right it,"

The Signs of Declining in the Power of US
Tags: pompeo ، china ، iran ، russia ، leadership ، basirat
Error Report
0