Saudi in talks with US for Arab front against Iran: Jubeir

TEHRAN(Basirat): Saudi Foreign Minister Adel al-Jubeir arrives for a press conference at the Diriya Palace in the Saudi capital Riyadh during the Persian Gulf Cooperation Council (GCC) summit on December 9, 2018. 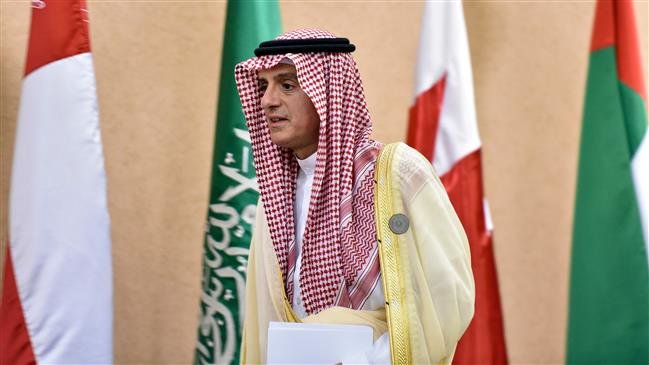 Saudi Arabia Foreign Minister Adel al-Jubeir says the kingdom is in talks with the United States about a new security alliance of Arab countries specifically aimed at countering Iran.


Speaking at a press briefing in Riyadh Sunday, the Saudi FM said the new pact would be similar in style to the North Atlantic Treaty Organization (NATO) and would seek to protect the Middle East from "external aggression.”

"Talks are continuing between the United States and the (Persian) Gulf states around this question and ideas are being drawn up,” he said at the press call, which came after the annual Persian Gulf Cooperation Council (GCC) summit.

"The aim is to achieve security arrangements in the Middle East that can protect the region from external aggression… and strengthen relations between the United States and the countries of the region,” Jubeir added.

The Saudi diplomat said the agreement, which is going to feature Egypt as a member as well, would be called the Middle East Strategic Alliance, or MESA.

The remarks confirmed months-long media reports about a joint push between Riyadh and Washington for the establishment of a so-called "Arab NATO” that would also serve Israeli interests in the Middle East region.

US Deputy Assistant Secretary of State for Persian Gulf Affairs Tim Lenderking on Sunday toured the region to convince Arab leaders to commit to the plan.
The idea of an alliance comprising Saudi Arabia, United Arab Emirates, Kuwait, Bahrain, Qatar and Oman along with the US, Egypt and Jordan was first floated during US President Donald Trump’s visit to Riyadh last year.
The remarks by Jubeir came amid a widening rift between the White House and US lawmakers over Washington’s ties with Riyadh.
While Saudi Arabia continues to receive unconditional support from the Trump administration, Riyadh’s stature has plunged in the halls of Capitol Hill.
Trump has so far resisted strong pressure from Congress to go after the de facto Saudi leader, Crown Prince Mohammed bin Salman, for his actions.
Besides leading a deadly war on Yemen since March 2015, the young prince stands accused of ordering a hit job on dissident journalist Jamal Khashoggi, who was murdered after entering the Saudi consulate in the Turkish city of Istanbul on October 2.
Trump argues that subjecting Saudi Arabia to punishment in high times like this would alienate the longtime ally and push it towards Russia, jeopardizing Israel and billions of dollars in US arms deals.
American lawmakers, however, argue that the US can still punish MbS without harming ties.
'Saudis would be speaking Farsi if it wasn't for US'
Speaking to Fox News on Sunday, Republican Senator and close Trump ally, Lindsey Graham, said it was Washington that had the upper hand in the relationship with Riyadh and not the other way around.
Noting that the Saudi military "can't fight out of a paper bag," Graham said Washington’s support was the only thing that helped Saudi Arabia survive Iran’s influence.
"Let me put it this way -- I want to be very blunt with you," Graham asserted. "If it weren't for the United States they’d be speaking Farsi in about a week in Saudi Arabia."
Selling more weapons by spreading Iranophobia
The US has long used Iranophobia as a tactic to keep Arabs on its side and sell them more weapons.
During his maiden state visit to Saudi Arabia, Trump convinced bin Salman to sign a massive $110 billion arms deal.
The American head of state said in early October that he had warned Salman the kingdom would not last "for two weeks" without US military support.
"I love Saudi Arabia. They are great, King Salman, I spoke with him this morning. I said, king, you have got trillions of dollars. Without us, who knows what’s going to happen. .... With us they are totally safe. But we don’t get what we should be getting," he said back then.
Last week, Iran Foreign Minister Javad Zarif warned Washington that the policy of pouring weapons into the Middle East far beyond its real defense needs had turned the Middle east into a "powder keg."