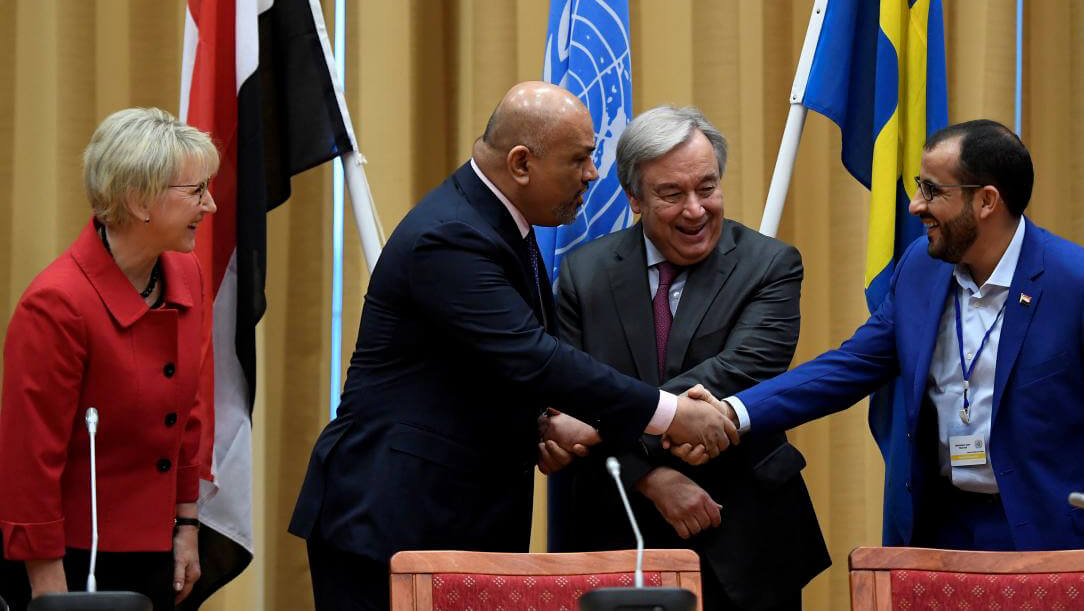 At the close of a week of talks in Sweden, UN Secretary-General Antonio Guterres said a framework for political negotiations would be discussed at the next round of talks at the end of January between the Houthis and the Saudi-backed loyalists of former president Abd Rabbuh Mansour Hadi.
The Houthis control most towns and cities including the capital Sanaa.
UN envoy Martin Griffiths said both parties would withdraw "within days” from the port, main entry point for most of Yemen’s commercial imports and aid supplies, and later from the city of Hudaydah, where coalition troops have massed on the outskirts.
International monitors will be deployed in Hudaydah city, and all armed forces are due to pull back completely within 21 days of the ceasefire coming into force.
Another joint committee overseen by the UN will set up humanitarian corridors to Tai’zz, Yemen’s third city. Guterres said the UN would push on with tackling issues hanging over from the talks, including reopening Sanaa airport and shoring up the central bank.
Yemen’s Houthi movement said the ceasefire is a victory for the war-torn country as it will stop Saudi attacks on the strategic city of Hudaydah.
Based on the deal, "the existing local authorities will be officially in charge of controlling the city and establishing security there under the supervision of the UN,” Houthi chief negotiator Muhammad Abdulsalam told Al-Masirah TV.
He said Hudaydah must be kept apart from the military conflict, and that a government should be formed first before all parties are disarmed.
Forces loyal to Hadi and the Saudi-led mercenaries were forced to sit for talks with the Houthi movement after their massive operation to seize the port city of Hudaydah failed.
Saudi Arabia and the United Arab Emirates had deployed about 10,000 troops to Yemen's west coast after repeated campaigns to seize Hudaydah were thwarted by the Houthis and their allies.
The Houthi movement views the truce deal a defeat for the Saudis as it stops the aggression, allows existing local protectors who thwarted the Saudi offensive to be in charge of the city, and allows the Yemeni nation to regain their access to food, medicine, and other basic supplies.
In his remarks, Abdulsalam said there is no sign that the Saudis are going to stop their aggression against the innocent people of Yemen despite the ceasefire deal.
One of the articles of the draft agreement proposed by the Houthi delegation is "the complete cessation of military actions in Yemen,” but the Saudi side is rejecting it, he said.
Abdulsalam also called on the Yemenis to remain vigilant, especially in Hudaydah and Tai'zz, and continue supporting the Yemeni army and popular committees.
"Those who have shown resistance against 17 countries for four years can achieve a brilliant victory,” he added.
The U.S. Senate on Thursday voted to stop U.S. armed forces from supporting Saudi Arabia in its military aggression against Yemen.
The U.S. Department of Defense said it has sent Saudi Arabia and its main partner, the United Arab Emirates, a $331-million bill for the fuel their warplanes have received from American refueling aircraft during the past four years in the Yemen war.
"Due to errors in accounting by the Pentagon, the United States had not properly charged Saudi Arabia and the United Arab Emirates for those services,” Senator Jack Reed of Rhode Island, the senior Democrat on the Armed Services Committee, said in a statement.