US War Without End: How Not to Withdraw from Iraq 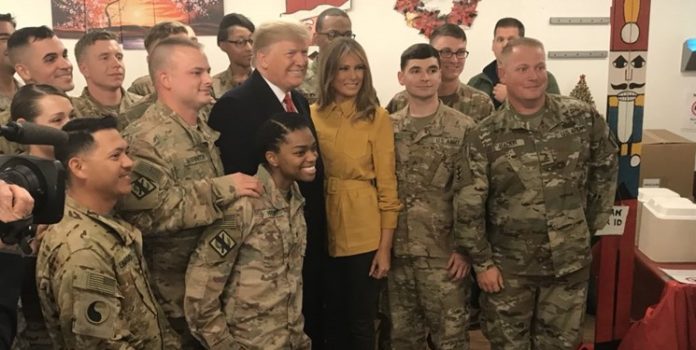 This comes as Iraqi MPs and people are against any continued, long-term US military presence in their country. MPs from both ruling and opposition blocs in parliament are now united in calls for an extraordinary session to debate the matter, saying that the question of US violations of Iraqi sovereignty must be answered. The ruling bloc and its leader Moqtada al-Sadr have long spoken out about the need for Iraq to get out from under the domination of foreign powers and seek a more independent future. They even seek a vote to expel US forces from Iraq, else armed forces would force them out "by other means.”
If you're wondering why in the world this does matter (after some 15 years of occupation and terror), then you haven't come to grips with Trump’s greatest magic trick of all. Though the lame-duck president on New Year’s Eve seeks some kind of political score, sporting dismally government shut-down and low job-approval ratings, he continues to embed the US in Iraq, while framing the issue of what to do there in such a way that any thought of withdrawal has fled the scene:
President Trump greeted American troops on his unannounced trip on Wednesday, where he defended his decision to withdraw forces from neighboring Syria and declared that ISIL was "very nearly defeated”. It was his first visit to a conflict zone as commander in chief. Trump used his visit to Al Asad Air Base to amplify his call to draw down the US presence in foreign wars and assert his personal influence over the military at a moment of tremendous turmoil at the Pentagon.
After months of public pressure for him to spend time with troops deployed to America’s endless wars in the Middle East and Central Asia, Trump touched down at the joint US-Iraqi base west of Baghdad after a secret flight from Washington. He sounded a triumphant note as he addressed US service members on the day after Christmas:
"We’re no longer the suckers, folks,” he said. And he warned that he was committed to withdrawing troops from foreign wars even when his administration’s experts object. "The United States cannot continue to be the policeman of the world. It’s not fair when the burden is all on us, the United States.” He, however, said there are "no plans at all" to withdraw from Iraq!
Admittedly, somewhere over 60% of Americans, according to media opinion polls, want all US troops out of Iraq. This is not just the "combat troops" which Trump is not prepared to withdraw at a relatively stately pace. Combat troops represent perhaps half of all US military personnel in Iraq - and neocons are already attacking even their withdrawal as cut-and-run-ism, if not outright treason.
Americans may not have noticed, but the policy that a large majority of them want is no longer part of polite discussion in Washington where Trump’s one-man foreign policy reigns supreme. Even the party of "withdrawal" (including Trump) would still leave American troops behind for various activities. Trump says "US forces will stay in Iraq and could re-enter Syria from there.” He forgot to mention that these would include the "training" of the Iraqi military; troops might be left to guard Washington’s monstrous new embassy in Baghdad; or as an ISIL-oriented strike force; or even to protect American security contractors and hired guns (running into the tens of thousands).
Hard as it is to separate the mechanics of facts from fiction, occupation of Iraq was never about liberating people, fighting terror or training Iraqi forces. It was a permanent draw-up, not a drawdown, to occupy the country and wage war against its unfortunate neighbors, including, Trump says, against Syria.
To that end, the Pentagon regime has been digging in. In the past few years, it has continued to upgrade its massive bases in Iraq to the tune of billions of dollars. It has brought in extra air power for an "air surge" possibly in Syria. Little wonder Trump didn’t talk about drawing down that air surge, even though there has recently been a spate of incidents in which Iraqi and Syrian civilians have died from US airstrikes.
Admittedly, in the land the Bush regime claimed to have "liberated", the Trump regime will continue to entrench occupying American forces on those mega-bases for years to come. Trump is just an extension of Bush and Obama’s Iraq occupation policies. Just like his predecessors, he will not negotiate anything that might tie the hands of the next commander in chief, whomever he or she may be.
All of this, in the grand tradition of War Party, means a permanent occupation of Iraq and a permanent threat against its neighbors, with future planning for draw-downs or withdrawals based on the need to preserve whatever the Americans have brought - and are still bringing - into Iraq and the wider region.
At any rate, Trump’s undisclosed visit on December 26 served as further proof that US occupying forces are not welcome and that the time for US withdrawal from Iraq has long passed. The occupying regime is incapable of "solving" Iraq's problems, "building" a nation there, or preventing an endless string of horrific things from occurring. Lest we forget, it was under US occupation and terror that Iraq devolved and massive ethnic cleansing by ISIL occurred, destabilizing the entire planet.