TEHRAN (Basirat) :Secretary of Iran's Expediency Council Mohsen Rezayee underlined that the Europeans have not implemented their undertakings under the 2015 nuclear deal, saying that the INSTEX (Instrument for Supporting Trade Exchanges) mechanism is not enough. 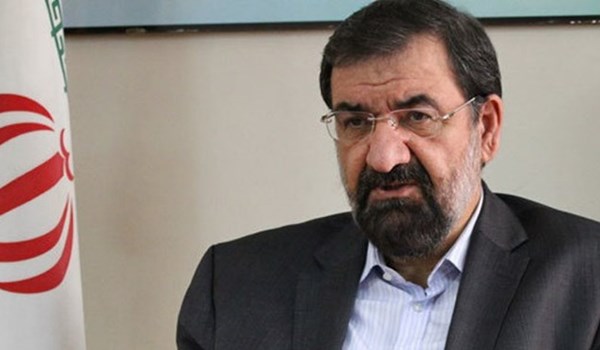 "We are not satisfied with the Europeans' behavior at present," Rezayee told reporters in a press conference in Tehran on Saturday.
He added that their approval of INSTEX mechanism does not mean that they have adopted sufficient measures to implement their nuclear deal undertakings.
Rezayee is the secretary of the Expediency Council which is the last high-ranking Iranian body to decide the fate of the FATF that has been considered by the European countries as a pretext for implementation of the INSTEX.
In a news meeting in Bucharest last month, German, British and French foreign ministers officially announced the commissioning of the European special financial mechanism known as INSTEX.
Iran has rejected conditioning the INSTEX on the approval of FATF requirements, saying that it is among the undertakings Europe had accepted under the Joint Comprehensive Plan of Action (JCPOA) and the EU is required to hold up its end of the bargain without asking for more moves and undertakings by Iran.
Iran has been required to fulfill dozens of FATF recommendations to enhance its status from a blacklist of non-cooperative countries, while the country is under US sanctions. The country's status in FATF has no impact on toughening or easing the US sanctions.
FATF has required Iran to implement a number of moves that include endorsement of several conventions.
Palermo bill is one of the four government bills seeking to bring Iran's anti-money laundering and countering terrorism financing standards into line with those defined by the FATF.
The parliament has approved all the measures but except for the bill that updates Iran's domestic law on countering financing of terrorism. All the rest have been rejected by the Guardian Council – a watchdog that ensures laws are in line with the Constitution and Sharia.
The bills on Iran’s accession to the Palermo Convention and the CFT were rejected by the Guardian Council in early November due to some flaws that violated the country’s Constitution. The bills were then amended by the Iranian Parliament, waiting for the next steps in the Guardian Council.
To fulfill FATF requirements, President Hassan Rouhani’s administration has proposed four bills to the parliament for approval, two of which are still undecided, including the Palermo Convention. They have been referred to the Expediency Council for final approval.
Yet, Iran has recently approved a national anti-money laundering (AML), which was a domestically-developed bill.
In its February meeting, the FATF decided to extend the deadline for Iran until June to complete reforms under the specified action plan that includes a list of 9 major moves, including the opening of its financial transactions data bank to the FATF that is headed by the US Department of the Treasury’s Assistant Secretary heading the Office of Terrorist Financing and Financial Crimes Marshall Billingslea.
The Political-Defense-Security and Legal-Judicial Commissions of the Expediency Council declared in January that endorsement of the Palermo bill would run against the country's interests.
In relevant remarks on January 26, Rezayee announced that the EC's specialized commissions have rejected the country's endorsement of the Palermo bill, adding that the final decision would be made in the Council's next meeting.
Speaking to reporters after an Expediency Council meeting on Palermo convention here in Tehran, Rezayee said that the EC's specialized commissions have concluded that harms and losses of Iran's endorsement of the convention would overpass its merits.
"It is a reality but the EC will have the final decision in this regard," he added.
Asked if Iran is entitled to set preconditions to join Palermo and the blur conditions surrounding this issue, Rezayee said, "Of course, there are much more ambiguities too and it was decided that the pros and cons study them in the next meeting."
It was the second week in a row that the EC deferred the decision on the bill for further studies.
In its last session today, the EC postponed a final decision on the endorsement of Palermo to the next Iranian year (to start on March 21).