Iran Will Never Give In to US Pressures: President Rouhani

TEHRAN (Basirat) – Iranian President Hassan Rouhani praised the nation for achieving great victories in the face of the US over the past year, stressing that the Islamic Republic will never surrender to enemies or back off from safeguarding its independence and democracy. 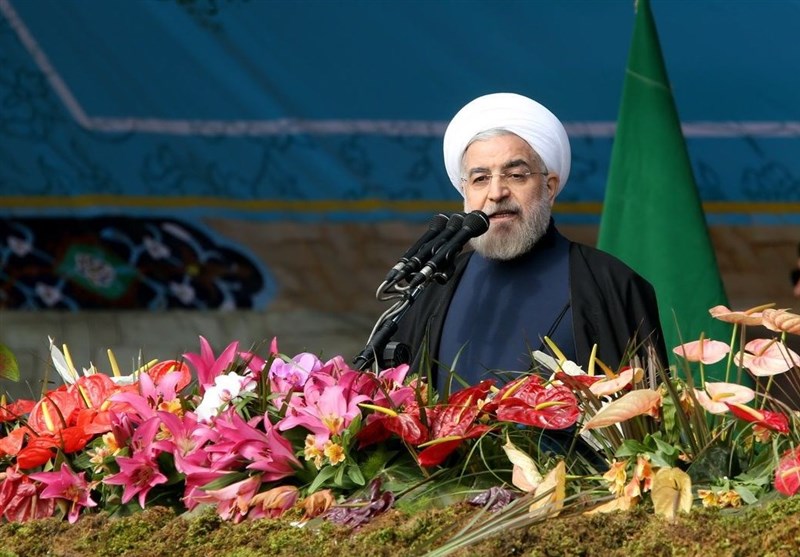 In an address to people in the northern city of Lahijan on Wednesday, Rouhani highlighted the delicate situation that Iran is now facing, saying the great Iranian nation has gained major victories in the "great historical test” over the past year.
Iran is in a "psychological and economic war” situation, the president said, adding that surrendering to the enemy in the current stage would wipe off all democratic achievements of the past decades.
The US wants to force Iran to return to 40 years ago, Rouhani deplored, saying, "But we say that our path is (one of) independence and democracy. (These are not things one) can compromise on.”
Rouhani said the adversaries were seeking to defeat the Iranian nation in the current Iranian year –which ends in two weeks-, but the great nation resisted pressures in all difficult stages.
"The enemy (the US) did not have any success in its plots against Iran at the Warsaw conference,” the president said, stressing that Iranians have emerged victorious despite all plots, acts of sabotage and sanctions by the adversaries.
In comments in December 2018, Leader of the Islamic Revolution Ayatollah Seyed Ali Khamenei highlighted the Iranian nation’s resolve in standing against the US plots over the past decades, saying Washington has been trying to regain control of Iran like the pre-Revolution era and create the same situation that it has established in certain weak regional countries who have been derided as cows milked by the US.

Pointing to the uncovered plots that Americans have hatched over the past two years to harm Iran, such as imposing sanctions and assisting Iran’s foes, the Leader said the US objective was to create bipolarity and division in Iran through sanctions and anti-security measures.

In May 2018, the US president pulled his country out of the Joint Comprehensive Plan of Action (JCPOA), the nuclear deal that was achieved in Vienna in 2015 after years of negotiations among Iran and the Group 5+1 (Russia, China, the US, Britain, France and Germany).

The US had announced plans to drive Iran’s oil exports down to zero, but backed off from its policy and granted waivers to at least 8 countries that import Iranian oil.

Zarif:Iran needs no mediator for talks with US
US to Be Defeated in Face of Iran Once Again: President
Zarif Reminds E3: No Prohibition on Iran’s Uranium Enrichment
Tags: basirat ، hassan rouhani ، JCPOA
Error Report
0