We will export oil as much as we intend: Ayatollah Khamenei

Tehran (Basirat) :On the occasion of the National Week of Labor and Laborers, a group of laborers from across the nation met with Ayatollah Khamenei—the Supreme Leader of the Islamic Revolution— at the Hussayniyeh of Imam Khomeini (r.a), this morning April 24, 2019. 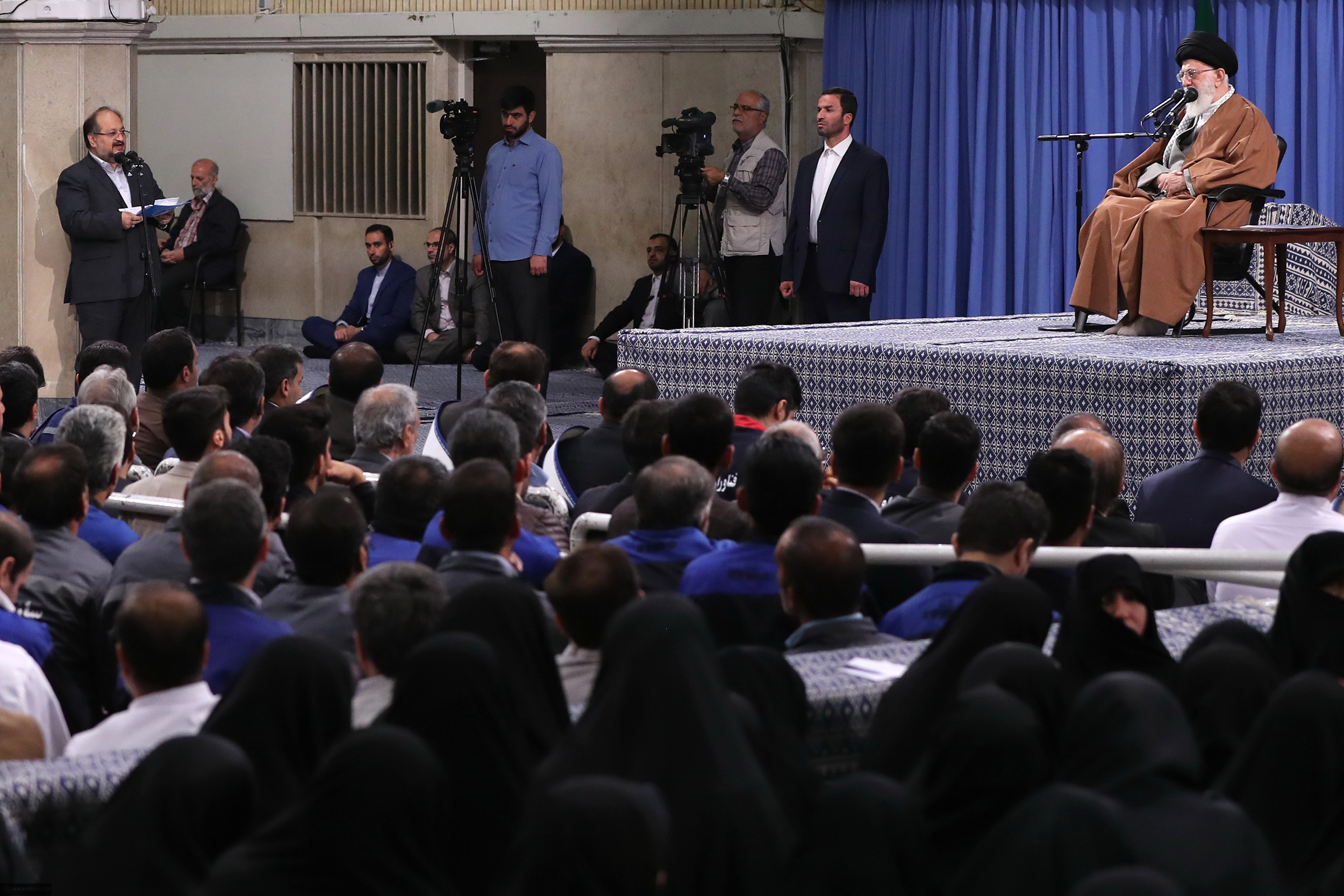 At this meeting, Ayatollah Khamenei slammed U.S. recent wave of sanctions of Iran’s oil exports and asserted: Firstly, their efforts won’t get them anywhere. We will export our oil as much as we need to and we intend to. They have wishfully blocked the way for us, but the vigorous nation and vigilant officials—if they work hard and determinedly—will open many blockades.

The Supreme Leader warned the U.S. that their hostile measure will be countered and stressed that: Secondly, they should know that this hostile measure will not be left without a reaction; they will receive the response to their animosity. The Iranian nation is not a nation that would sit idle in the face of hostilities.

The Leader of the Islamic Revolution regarded the sanctions as yet another opportunity for Iran to reform its oil sales policies and stated: Thirdly, the less we rely on this form of selling our oil, the more will we be appreciative [of our oil reserves], and it is better for us.

Ayatollah Khamenei referred to the many failures the enemies of the Islamic Republic have faced in their hostile measures against the Iranian nation and held: The enemy has repeatedly taken measures—all in vain—against our great nation, Revolution and the Islamic Republic that have voiced support for justice across the world, thus fascinating other nations. Now the enemy engages in different hostile measures regarding economic issues and they say they seek to bring the Iranian nation to their knees. However, they must know that the Iranian nation won’t give in and be brought to their knees before enemies.

Praising the community of laborers in Iran for their sincere adherence to the Islamic Revolution, Ayatollah Khamenei urged officials to address issues that affect laborers and confront abuse of power against laborers by saying: The community of laborers represents one of the most loyal social groups to the Revolution. Some, with abusive intentions, buy factories from the government and build towers in their place. All the branches of power should confront this [manipulation]. The enemy has insisted in all the possible areas of distress, and more than anything else, on the issues concerning laborers.

His Eminence went on to say: In all cases, the laborers have disappointed the enemy. It has been the case for forty years. The community of laborers was among the most loyal to the revolution.
The Supreme Leader once again urged government officials to appreciate the laborers and make efforts to prevent the obliteration of factories for the sake of corporate interests, adding: Government officials, policymakers, and the executives should be watchful and appreciate the value of it. I address this to all the officials of the country, and not just the Labor Ministry: There exist people who only seek to fulfill their own interests. They buy a working factory from the government and destroy it, sell its machinery in order to rise up skyscrapers to replace them. All the branches of power should counter and prevent it.

Imam Khamenei—the Supreme Leader of the Islamic Revolution—then advised everyone to promote a spirit of perseverance and striving and held: We should not promote the culture of lassitude and expecting easy money among the people. We should promote a culture of work, producing and endeavoring. The spirit of lassitude and expecting easy money should be eradicated. Different organizations should avoid the type of activities that resemble lotteries; be aware.

In the Quran we read: "nor can man achieve anything without hard work; [Quran; 53:39]." The true achievement of humans is what they have gained through hard work. Where one’s mind, body, and willpower acts, is where the society will advance. We should work hard, yet, our view is not solely materialistic. We also look forward to spirituality, correction, and dignity for the society as well as its moral progress.