US not powerful, brave enough to break out war against Iran: IRGC chief

TEHRAN(Basirat) : –Considering Iran’s defensive power and weakness of the US’s aircraft carrier, the country is neither brave nor powerful enough to start a war against Iran, an Iranian Parliament member Mohammad Ali Poormokhtar quoted IRGC Chief Commander Major General Hossein Salami as saying during a closed session of the Parliament on Sunday. 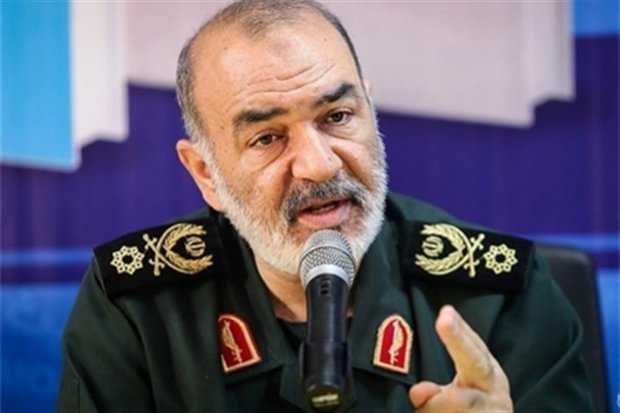 Informing that Major General Salami presented a report about his plans for future to the parliament members during the closed session, Poormokhtar quoted the IRGC chief as saying that the guards corps is determined to tighten its ties with the Parliament and the members.
“Major Salami underlined that the US' dispatching carrier USS Abraham Lincoln (CVN-72) to the regional waters is a psychological warfare aimed at startling Iranian nation and some of officials,” the MP said.
“US war against Iran is impossible since the US does not dare to and is not powerful enough to start it because of Iran’s defensive power and the vulnerability of the US aircraft carrier. The US cannot take such a risk,” Poormokhtar quoted the IRGC chief as saying.
The US has sent a naval strike group led by the Abraham Lincoln carrier to the Middle East as a ‘signal to Iran’, threatening that “any attack on United States interests or on those of our allies will be met with unrelenting force.”
On May 7, the military aide to the Iranian Leader said that US is both 'unable' and 'unwilling' to wage a military war against Iran and dragging the Middle East region into crisis. There is still little rationality in the US administration to prevent extremist actions such as waging a war against Iran, Brigadier General Hossein Dehghan said in an interview with Alarabiya.
Americans, Israelis and Saudis want to imply that the region is on the threshold of a crisis, but they are well aware that after firing the first missile, the next ones will not be limited to a specific geographical area, added the former Iranian defense minister.
“Americans are unwilling and unable to carry out military action against us ... and their unwillingness stems from their inability to drag the region into tension or wage military action against Iran,” he noted.