IRGC chief: Iran not after war, but not afraid of one either

Tehran (Basirat) :The chief commander of the Islamic Revolution Guards Corps (IRGC) says Iran does not seek war but is not afraid of one either. 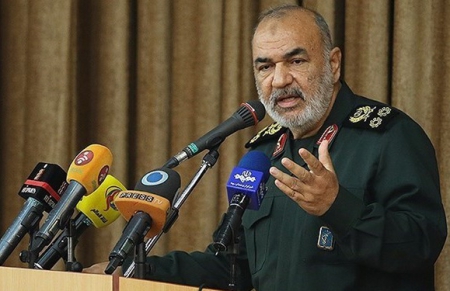 Making a speech on Sunday, Major General Hossein Salami said that Iran was currently facing a threat close to its territory and thus the IRGC had operationalized its resources against that threat.
“When a threat is posed from afar, we think about it [only] on a strategic level, but when it comes close, we become active on operational levels as well,” he said.
He emphasized that Iran did not intend to be the aggressor party.

“We are not after war but we are not afraid of war either; though, before us, enemies do not have the will to wage war and are afraid of fighting [too],” Major General Salami said.
He stressed that Iran was prepared in all defensive areas.
On April 8, the United States blacklisted the IRGC, prompting Iran to reciprocate by designating American forces based in West Asia as terrorists. The US has also deployed an aircraft carrier, a bomber task force, and an assault ship to the Persian Gulf, claiming that IRGC boats in Iranian waters in the Persian Gulf were equipped with missiles.
Elsewhere in his remarks, Major General Salami said that the US was powerful only in appearance.
“Great powers suffer attrition from within gradually, but their fall is abrupt. Today, we are witnessing the gradual erosion of this power (the US), and in the near future, we will bear witness to the fracturing of the pillars holding it in place,” he said.
Salami also said that the IRGC “is today in direct contact with the enemy and has hindered its advance everywhere.” He did not explain.
On Tuesday, Leader of the Islamic Revolution Ayatollah Seyyed Ali Khamenei played down Washington’s belligerent posture against Iran. Ayatollah Khamenei ruled out the possibility of war between the US and Iran, saying Washington knew that engaging in such a conflict would not be in its interest.