Tehran (Basirat) :John Bolton, US National Security Advisor, continues to promote war and terror and violence in his foreign policy. Bolton's title is basically tied to crime, war, and terror. 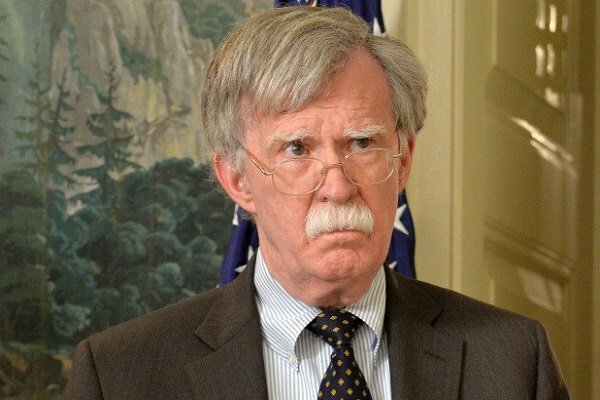 In George W. Bush's presidency, people like Dick Cheney and John Bolton have become the messengers of the White House's defeat in the world. This time Bolton has also become a messenger for defeating Trump and the United States in the world. The US National Security Adviser is having difficult days. John Bolton has not been able to achieve his goals toward the Islamic Republic of Iran. Many American analysts say the National Security Adviser to the Trump government has become the symbol of the White House's failure in the international system.
Bolton's story is a sad story for American citizens! He is today a symbol of the embarrassment of all Americans. Bolton was one of the influential officials in the country since the start of the war in Iraq in 2003, by the George Walker Bush administration until 2008 (when the neocons in the United States were at the head of the political and executive equations of the country). Bolton and his entourage have repeatedly become the symbol of the failure of the United States in the West Asia region. However, Bolton's defeat in the United States is now far broader! John Bolton, the US National Security Adviser, continues his anti-Iranian negotiations in various fields. In recent months, he has been busy discussing the presence of Iran in Syria and, on the other hand, engaging in negotiations with other countries over Iran's sanctions. But the existing evidence suggest that the US National Security Adviser is not going to succeed in this regard.
Democratic presidential candidate Bernie Sanders responds to a New York Times report about the Trump administration's potential plan to send thousands of troops to the Middle East, saying national security adviser John Bolton "was one of the architects of the war in Iraq."
As Peter Bergen, CNN National Security Analyst wrote, John Bolton, President Trump's national security adviser, seemingly hasn't met a war he doesn't love. Bolton was a prominent proponent of the Iraq War and he has never evinced any doubt about the wisdom of that decision, telling the Washington Examiner four years ago, "I still think the decision to overthrow Saddam was correct."By contrast, last year President Trump said the Iraq War was "the single worst decision ever made."
Just before he was installed a little over a year ago as Trump's national security adviser, Bolton advocated for a pre-emptive war against North Korea in the Wall Street Journal.
The US government is now ramping up tensions with the volatile North Korean regime, announcing Thursday that it had "recently" taken into custody a North Korean ship that was defying sanctions on the nuclear-armed state -- the first time the US has taken such an action.
But Trump's general approach to North Korea has been to engage in negotiations with its leader, Kim Jong Un. In recent weeks Bolton pushed for a coup in Venezuela involving opposition leader Juan Guaido that was believed to have the backing of key officers of the nation's military. The US-backed uprising seems to have fizzled. Trump has since expressed frustration to White House officials about Bolton's overly aggressive Venezuela policy.
On Thursday, President Trump said that he actually moderates the bellicose Bolton: "I'm the one who tempers him, which is OK. I have John Bolton and I have people who are a little more dovish than him."
Bolton's enthusiasm for the muscular use of the military seems out of place in the administration of a President who has repeatedly questioned and sought to end America's wars in the Middle East. Yet while Trump and Bolton may be out of step with each other on policy toward Venezuela and North Korea, one country they both seem to be on the same page about is Iran.
Bolton, 70, has espoused deeply conservative views since he was a teenager. The son of a Baltimore firefighter, Bolton worked on the Barry Goldwater Republican presidential campaign in 1964, and he later interned for President Richard Nixon's vice president, Spiro Agnew. Bolton went to Yale and then to Yale Law School. He has worked in Republican administrations since Ronald Reagan's first term.
Bolton has long rejected any constraints on American power. The happiest moment Bolton had when he was working for the US State Department was when he "unsigned" the agreement that made the United States a party to the International Criminal Court, which he saw as a risk for US political and military leaders who might be charged with war crimes. After Bolton pulled the United States out of the agreement in 2002, he said he felt like a kid on Christmas Day.
When Bolton became Trump's national security adviser, he ensured that anyone on the International Criminal Court who was investigating American soldiers or intelligence officials for possible war crimes in Afghanistan was denied visas to the United States.
Bolton's dislike of the Iranian regime is longstanding. In 2015, Bolton wrote in the New York Times that the United States should bomb Iran because "Iran will not negotiate away its nuclear program," which is exactly what Iran did that same year when it negotiated an agreement with the Obama administration to halt its nuclear weapons program. The New York Times reported that Bolton has ordered up military options that were presented to top Trump national security officials last week. They include the potential deployment of as many as 120,000 American troops to the Middle East if Iran attacks American targets in the region or resumes work on its nuclear weapons program!
What is certain is that Bolton's political death is very close to the American National Advisor. He is doomed to failure! What is certain is that John Bolton has no choice but to confess to defeat against Iran. As we can see, John Bolton has started a full-fledged opposition to the Islamic Republic of Iran in the economic, political and regional dimensions. Donald Trump seems to have given Bolton full authorization in this regard, but he has not been able to take a practical step forward in confronting Iran.