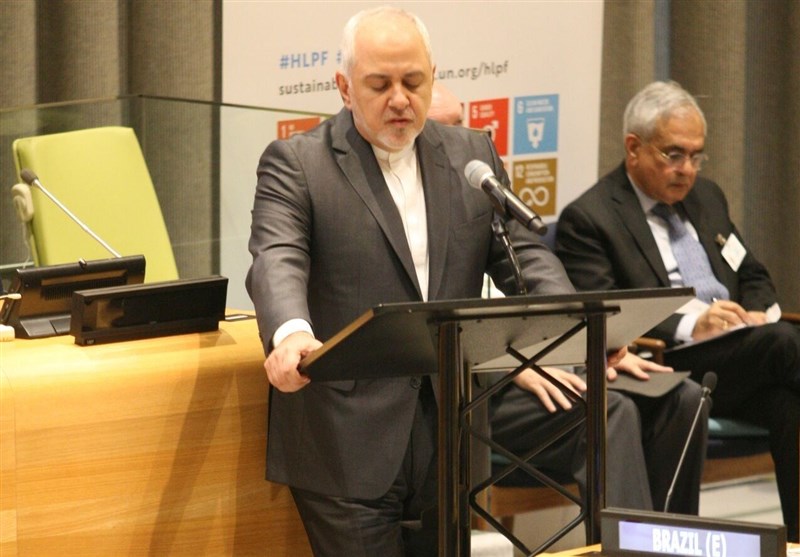 Addressing the Ministerial Meeting of the High-level Political Forum on Sustainable Development, held at the UN on Wednesday, Zarif said the unlawful extraterritorial economic sanctions that Washington has imposed on Iran violate the UN Security Council Resolution 2231 and represent the greatest threat to the achievement of sustainable development goals in Iran.
What follows is the full text of the Iranian foreign minister’s speech:
"In the name of Allah, the Compassionate, the Merciful,
Madam President,
As we address this year’s HLPF theme of "empowering people and ensuring inclusiveness and equality", we note that Secretary General’s report indicates sluggish progress in many areas, and underlines that “the most vulnerable people and countries continue to suffer the most and that the global response thus far has not been ambitious enough”. We agree with the Secretary-General that "inequality between and within countries is disturbingly high" and that "development is not sustainable if it is not fair and inclusive."
Failure so far can be attributed to the failure of the developed world in keeping their side of the bargain, including those related to transfer of technology, capacity building, and financial assistance.
Madam President,
In spite of huge impediments caused by unlawful unilateral sanctions, the Islamic Republic of Iran has made significant progress in people’s empowerment and equality, working on the basis of its own principles and national priorities: 27% of faculty members, 50% of college students, and 37% of medical doctors are currently women. At the decision-making level, there has been a 60% increase in appointments in a bid to ensure our goal that by 2020, 30% of national decision makers are women.
In the implementation of our national “Comprehensive Low-Carbon Plan”, we surpassed our intended mitigation of greenhouse gas emission of 4% lower than BAU.
Ending illiteracy and providing free public education has approached its full realization, and the literacy rate among Iranians is now at 97% of the population. An average of 15% of household expenditure is now spent on education.
Effective training for the socially harmed and disadvantaged groups, as well as for rural and nomad communities and prisoners, is now being offered.  Educational opportunities have been extended to migrants and refugees, and currently 400,000 Afghan students are registered at local schools in Iran.
We in Iran face serious challenges in these efforts, challenges that include natural disasters, land degradation, desertification, and water scarcity. Regional threats and insecurity caused by foreign-sponsored terrorism, extremism and violence, hamper our efforts. Our people are also subjected to the most brutal form of “economic terrorism”--deliberately targeting innocent civilians to achieve illegitimate political objectives. The unlawful extraterritorial economic sanctions imposed on Iran by the United States in violation of Security Council resolution 2231 represent the greatest threat to the achievement of sustainable development goals of Iran and many of our neighbors.
Madam President
A renewed commitment to multilateralism and global solidarity is urgently needed. This should also entail, among others, the developed world re-visiting its commitment to help create an enabling environment for sustained economic growth and sustainable development of all countries, regions, and ultimately the planet as a whole.
I thank you for your attention."